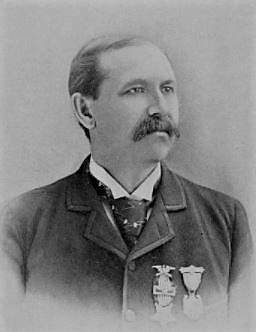 Col. Norman Martin Puffer, a successful business man of Bennington whose connection with industrial interests has been of decided advantage to this portion of the state, promoting its material welfare to no small degree, is a partner in and treasurer of the Bennington Knitting Company, advancing to this position entirely through his own efforts. Colonel Puffer is of German lineage on the paternal side and English descent on the maternal side. Samuel T. Puffer, born 03 October 1765 and died 05 October 1842, married Joanna Eames, born 03 November 1766 and died 27 November 1820; both were natives of Connecticut. They were the parents of thirteen children: Joanna, Phineas, Aaron, James, Luther, Sophia, Elijah, Clarissa, Elijah, Martin, Windsor, Mary Ann, and Samuel.

Martin, of the before named family, was born 02 May 1802 in Connecticut, where he was reared and learned the machinist's trade, which he followed throughout his entire life. He married Mary Ann Follett, and in 1830 removed with his family to Bennington, where he died at the age of fifty-two years. He was a member of the militia, serving with the rank of lieutenant, and in 1840 was commissioned captain, and was well known throughout his portion of the state as an accomplished officer. His wife long survived him and died in 1892 at the advanced age of eighty-three years. Both were members of the Universalist church in early life, but later united with the Methodist denomination. Mrs. Puffer was born in 1809 in Pawtucket, Rhode Island, and by her marriage became the mother of six children, five of whom are yet living: (1) Norman M., referred to at length hereafter; (2) Maria, widow of George Raymond, formerly of Bennington and lately of Grand Rapids, Michigan; (3) Clarissa, the wife of Henry Tifft, of Hoosick Falls, New York; (4) Charlotte, who married E. C. Green, of New York City; (5) Wales W., deceased; and (6) Alfred E., of Des Moines, Iowa.

Norman Martin Puffer, of the before named family, was born 04 May 1847 in Bennington, Vermont. He acquired his education in the common schools and was a boy whose studies were unfinished when he laid aside his books and enlisted in his country's service to quell the Rebellion. He was only fourteen years old when he enlisted in the Second Regiment Vermont Volunteers in 1861, being among the first in the state to offer his services to the government. He became a drummer boy and served with the regimental band until it was disbanded by order of Congress. He re-enlisted in June 1862 as a musician in Company E, Tenth Vermont Infantry, with which he remained almost throughout the war; he was transferred to the Veteran Reserve Corps 30 September 1864, a veteran of only seventeen years of age. He was mustered out 29 June 1865. The historian of his regiment says that he was one of the best drummers in the Army of the Potomac, and that he was always brave and every ready to do his duty. His brother Wales was also a member of the regimental band, and his brother Alfred served in the navy until the close of the war. Norman M. Puffer was present at the surrender of General Lee, and also took part in the grand review in Washington, which followed the surrender of southern troops at Appomattox, this being the most splendid military pageant ever witnessed on the western hemisphere, continuing two days.

The drum which was given him at the beginning of the war he carried until 1863, when a new one was furnished him. He then sent the old one home by a comrade, but it never reached its destination and was lost sight of for thirty-five years. In 1898 it was found at a camp fire display which was being held in Pittsfield, Massachusetts, by a Grand Army post. A drummer of that post, when on parade at the National Grand Army encampment in Washington in 1892, broke his drum and purchased for two dollars in a pawn shop the drum which had belonged to Puffer. The instrument was retained by the Grand Army post of Pittsfield until the reunion mentioned, when Colonel Puffer's name and address were found inside the drum, and he recovered it. It is still in his possession, a prized relic of the times when he followed the starry banner of the nation upon southern battlefields.

In 1872 Colonel Puffer entered the employ of the Valentine Knitting Company, and through faithfulness and capability won promotion from time to time until he was made superintendent of the finishing department. In 1884 he became a member of the firm, and in 1887 was elected treasurer of the company, in which capacity he has since served. The house manufactures men's, women's and children's underwear on an extensive scale, employing eighty skilled operators in the factory, and the product is shipped to all parts of the country. The house is widely known for its reliability and the excellence of the workmanship, and not a little of its success and enviable reputation is attributable to the efforts of its treasurer. He is also a director of the Bennington County National Bank.

Colonel Puffer is one of the most prominent Grand Army men in the state. In 1873 he assisted in organizing Custer Post, and in 1889 Sixth Corps Post No. 112, and has several times occupied the position of post commander and was commander of the Department of Vermont in 1896-1897; has been many times a delegate to state and national encampments, and his collection of badges worn on such occasions is remarkably large and complete; and has also been aide-de-camp for General W. G. Veazey and General J. G. B. Adams. He is also quite prominent in the order of Odd Fellows, with which he has been identified since 1872; has occupied all the chairs of Stark Lodge No. 9; in 1883 became a member of Bennington Canton, of which he was the first captain; he afterward organized the regiment, and was elected its colonel in 1885; served in that capacity by successive re-elections until 1890. In 1890 was elected grand patriarch of the grand encampment; grand representative to the Sovereign Grand Lodge in 1891 in St. Louis, and in 1892 in Portland, Oregon. In the Masonic fraternity he is affiliated with Mount Anthony Lodge No 13, Temple Chapter No. 8, and Taft Commandery No. 8. Is also member of the order of Red Men; has served as senior sagamore and in other of the highest official positions. Republican. Has ever been a prime leader in all worthy movements. Has frequently served as village trustee, and as village president in 1898.

On 27 November 1873 Colonel Puffer married Olive F. Blackmer, a daughter of Warren and Betsy Blackmer. Warren Blackmer was born was born 23 November 1810 in Bennington, Vermont, and died 08 April 1889, a son of Jason and Huldah Blackmer. Jason Blackmer was born 24 April 1770 in Bennington, Vermont, and died 09 March 1849, and his wife was born in Deerfield, Massachusetts. Jason Blackmer was a son of Samuel, born in 1740 and died 05 April 1813, by his marriage with Abigail Bronson, born in 1740 and died 04 September 1834. Samuel was the only child of one Blackmer, who came from Taunton, Massachusetts, and located in what was then a trackless wilderness, but is now the site of the beautiful village of Bennington. Warren and Betsy Blackmer were the parents of nine children: Holland, Elmer, Dennis M., Anna Eliza, Barbara C., Marion L., Olive F., Effie C., and one who died in infancy. Of these, Dennis M., Marion J., and Olive F. are now living. Olive F., who is the wife of Colonel Puffer, takes an active interest in the Woman's Relief Corps, auxiliary to the Grand Army of the Republic, and in 1901 she served as president of the Department of Vermont. She has also held high official position in the order of Eastern Star. Mrs. Puffer is a zealous and devoted attendant of the Congregational church of Bennington. Col. and Mrs. Puffer have a living son, Louis Blackmer Puffer, born 24 July 1886, who is a student in the Bennington high school. Two children are deceased: Florence, who died 11 September 1875, and Warren B., who died 13 December 1883, aged seven years.

One of Bennington's Most Highly
Respected Citizens

Norman Martin Puffer, one of the prominent citizens of Bennington, who was one of the youngest survivors of the civil war, died Monday just before midnight at his home on Union street. Mr. Puffer had been in poor health since last winter after an attack of grip which left his heart in a weakened condition.

Mr. Puffer, who was born in Bennington May 4, 1847, was a son of Martin Puffer. He attended the district schools here and in 1861 enlisted as drummer boy in the regimental band of the Second Vermont regiment. He re-enlisted in 1862 in Company E of the 10th regiment and served through the war. Mr. Puffer had many thrilling experiences and his excellent memory made his reminiscences especially interesting. He was at Ford's theatre on the night that President Lincoln was assassinated and could give a graphic description of this incident, as well as many others that occurred during the war.

Late in the 60's, he entered the employ of A.B. Valentine and about 1880, he organized the Bennington Knitting company and with different associates, operated this industry until about eight years ago. At the time of his death, Mr. Puffer was connected with the Bennington Wax Paper company and was a director of the Bennington County National bank.

In November 1873, he married Olive F. Blackmer, three children being born to them. His widow and one son Louis, an instructor at R.P. I., Troy, survive. A daughter died in infancy and a son at the age of seven.

Mr. Puffer has always been closely identified with the Grand Army and when he died was past commander, department Vermont G.A.R. for the past ten years, he has been quartermaster of Custer post. He also was a member of Mt. Anthony lodge, Mt. Anthony chapter, Taft Commandery and Walloomsac lodge, N.E.O.P.

The funeral will be held at the house, Thursday afternoon at 2:30 o'clock. The service will be in charge of Mt. Anthony lodge, F&AM

Mr. Puffer has always shown as interest in the welfare of Bennington and was one of the most highly respected citizens of the community. In his death the Grand Army of Vermont and Custer Post will lose one of their most valued members. Colonel Puffer was one of the best read and thoroughly posted members of the order in the state. Only recently he compiled and published in the Banner a complete roster of the Bennington troops in the civil war. He was much interested in the raising of a fund for the building of a memorial hall to commemorate the service of the Bennington soldiers in the great struggle.