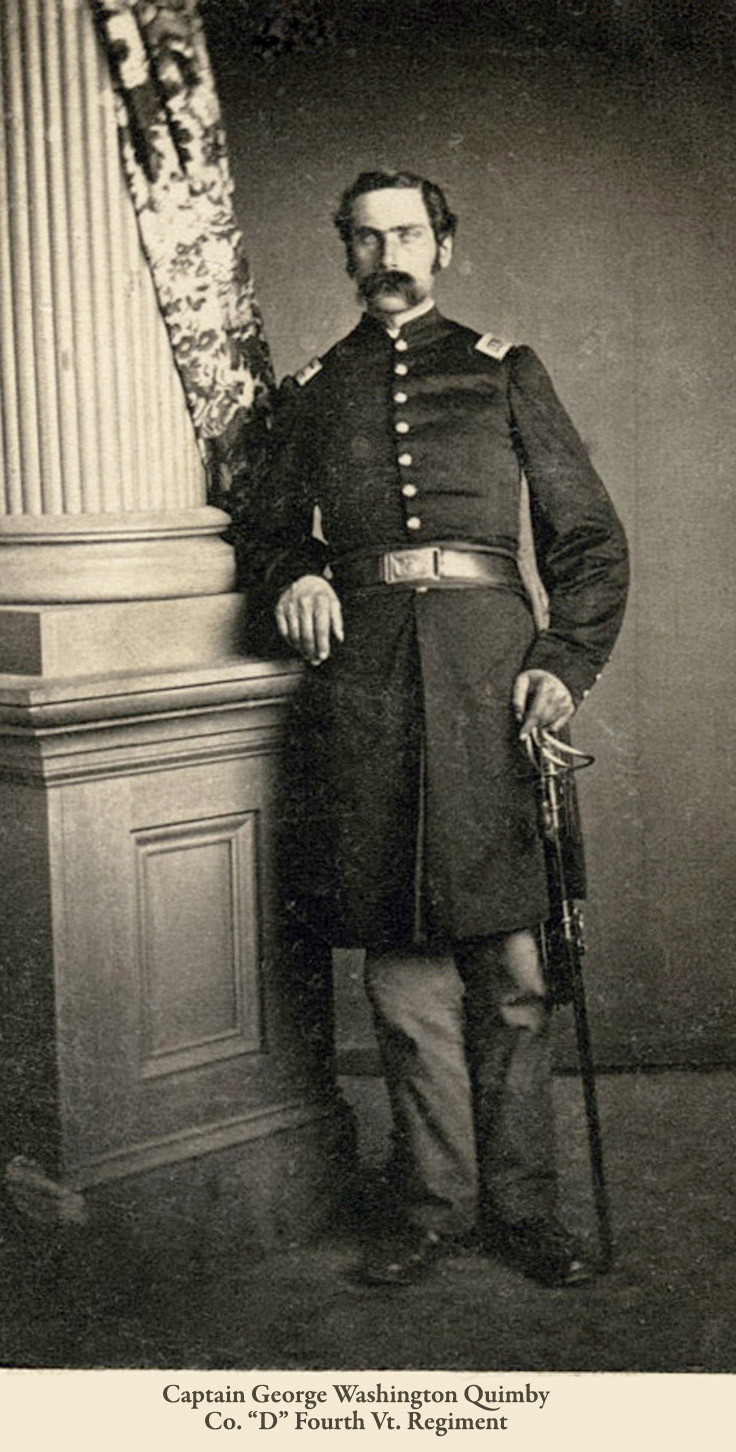 George Washington Quimby was born in Lyndon, Vermont, 18 Sept., 1835, son of Thomas and Delia (Huse) Quimby. He was a scholarly young man with great promise. He excelled in his studies in district school and afterward attended a local academy where he prepared for college. He graduated Dartmouth with the Class of 1859. Any plans he had made for a career were cut short when the Rebellion broke out. He entered service in the Civil War, and was killed at the battle of Fredericksburg, Virginia, 13 Dec., 1862.

"At another time the Vermont native might have become a career schoolteacher in the South. In December 1859, from Mobile, Alabama, Quimby wrote to his college classmate Henry Bridge Atherton: "I came out here expecting to teach in Georgia, but it being a little after that, the Harper's Ferry affair, some of the Trustees of the school would have nothing to do with a Northerner, and so I was shafted, and it is just impossible to secure a school here right now." He added, "It is not safe for a Northerner to go into small places. And they are as likely to have Vigilante Commissions in nearly all such places. And they are as likely to drive a man from the place without a word as any other way."

Quimby returned to Vermont. His brother-in-law helped secure him a job in Barton as headmaster of Barton Academy, and he also began to study law. His mother recalled, "He had nearly completed his studies preparatory to an admission to the Bar when he enlisted in July 1861. After carefully considering the subject from a sense of duty at the call of his country gave up home and friends and all that makes life pleasant for the fatigues and trials of a soldier's life." His older sister, Emeline, disapproved: "I urged him to wait until he should be drafted. His reply was, I will never go as a drafted man. I must give me life voluntarily or not at all."

Quimby started his service as first lieutenant in Company D of the Fourth Infantry.

His captain resigned in March 1862. Quimby took his place and led his men in several engagements during the Peninsular Campaign in Virginia. His mother summarized his contribution: "Here he exhibited the courage of a true soldier and for his coolness and bravery in the hour of fearful danger he was recommended for promotion as Major." He escaped injury on June 28. In a letter to Emeline, he explained, "the Rebels began to shell us - the shells flying over our heads we then moved in order under the hill under a large oak when the shells fell all around us and solid shot struck the oak under which I was sitting and completely covered me with bark - no one hurt."

Quimby suffered from sickness during and after the fighting on the peninsula and managed to stay on duty until a severe bout of diarrhea in September caused him to miss the action at Antietam. He rejoined his men after the battle. Two months later, on December 13, 1862, Quimby fell at Fredericksburg, Virginia. Acting as major, after spending most of the day exposed to artillery fire and enemy sharpshooters, he and his company formed part of a skirmish line. About sundown, Quimby, standing, cautioned his men to "keep low to avoid danger" as random shots whizzed all around.

A minie bullet struck him in the neck, severed his jugular vein and killed him instantly. A first sergeant and second lieutenant sitting next to Quimby caught him before he hit the ground. The second lieutenant, Charles Kinsman, remembered, "he never spoke and I think from the time he was struck never realized anything."

Kinsman gathered some men, who carried the body to a nearby hospital and placed it in care of the Fourth's chaplain. The next day, just after the chaplain secured a permit to transfer the remains to Washington, enemy fire hit the hospital. The chaplain was ordered to evacuate, leaving Quimby's body behind. When he returned it was gone. During his absence, a detail of soldiers, unaware of the situation, shuttled the body across the nearby Rappahannock River and buried it. The chaplain acted quickly, "I immediately sent across the River for an Ambulance, had the body disinterred, and by 3 of the o clock it was on its way to Washington" in care of a corporal. He brought the remains to an embalmer, who removed Quimby's worn, mud-splattered and blood-soaked uniform and prepared the body. Afterwards, it was transported via train to his mother and father in Lyndon, Vermont.

Meanwhile, Quimby's nephew Willie, a private in Company D, contacted the family with the sad news. Quimby's brother Moses, a minister, wrote in his diary that the funeral took place in Lyndon "at the Free Will Baptist house where large numbers met to weep with those who weep, and pay their last respects at departed worth.

Our national flag, with its stars and stripes, hung over the pulpit and on the opposite walls, cold in mourning, with its stars weeping over the lifeless remains of the brave man laid low in death by rebellion, while appropriate mottoes, 'Lyndon - weeps for her son' and 'Barton mourns a friend and officer' adorning two beautiful flags, one at each end of the coffin, told how highly the deceased was esteemed as a friend and a Christian patriot."

Quimby died at age twenty-seven. He never married. The members of Company D passed resolutions to honor their fallen commander and sent a copy to his parents. It read, in part, "That in the death of him our Capt. we feel that we have lost not only our Official head but our friend and protector and to day we mourn him as a kind and efficient Officer a brave an accomplished Soldier."

In 1886, a group of veterans established the George W. Quimby post of the Grand Army of the Republic in Barton, known today as American Legion Post #76. Some of Quimby's personal effects are displayed in Legion hall."

Capt. Quimby, whose death was noticed in last weeks Caledonian, was killed in the battle of Saturday, Dec. 23. His company had been engaged nearly all day, and had fallen back to rest. The Captain, 1st Lieut. And 1st Sergeant were seated together when a musket ball struck the Captain in the neck, severing his juglar vein. He fell into the arms of his comrade and died instantly. He was a young man of fine natural, as well as acquired abilities --- graduated at the Hampton (N.H.) High School a year in advance, and was of the graduating class of 1859 at Hanover. He then studied law two years at Barton, during a part of which time he was engaged as principle of Barton Academy. There he enlisted, one of the first in his company ( D 4th regt.) in defense of his country's flag and honor. He was chosen 1st Lieutenant, then promoted to the Captaincy, and for valiant conduct at Warwick Creek was recommended for further promotion.. He was a studious scholar, a congenial friend, and a brave officer --- and died at his post in a good cause, aged 27 years. His remains were embalmed and returned home, and funeral services held at the Baptist Church in Lyndon on Wednesday of last week. The gathering was very large, and exercises solemn and impressive. Flags were displayed at half-mast; and in church they marked the occasion of one of nations as well as local interest. Barton was represented by five young men, bearing the Stars and Stripes upon which read --- "Barton mourns her friend and officer,” On the Lyndon banner "Lyndon weeps for her son.” Rev. Mr. Henderson officiated as clergyman, assisted by Revs Woodman and Harris. The occasion was impressive and patriotic, and will long be remembered by a large circle of mourning relatives and friends. "Honor to the Good and the Brave!”

Capt. Quimby was killed at Fredericksburg [December 13, 1862], while nobly acting as Major of the regiment. He is spoken of as a young man of fine natural abilities - a graduate of Dartmouth College in 1859, studied law two years at Barton, during a portion of which time he was Principal of Barton Academy, and there enlisted to do service for his country. He was chosen 1st Lieutenant of his Company (D, 4th Regiment) and was promoted for bravery to the Captaincy. His age was 27 years.

Honor To the Brave

The remains of Capt. George Quimby, Co. D, 4th Vt. Vols., was brought up on the cars Monday night to his home in Lyndon. Capt. Quimby was killed in the recent fight before Fredericksburg. He was acting major at the time and bravely led his men forward when a ball struck him in the neck cutting off the jugular vein and killing him instantly. Capt. Quimby was a young man of fine natural abilities - a graduate of Dartmouth college, a gallant officer, a true soldier and gentleman. A large circle of friends will mourn his loss, but as they recall his upright life, they will be cheered by the thought that he has now been promoted to be one of the ‘household of God."