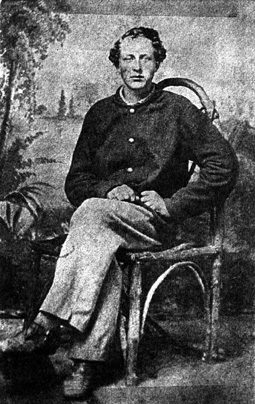 Milton Powers enlisted at Pittsfield, Massachusetts, on Oct 7, 1861, in the 11th US Infantry, 1st Battalion, Company D, under Captain Francis M. Cooley. Within "3 or 4 months" (according to a deposition by Capt. Cooley) he was promoted to Sergeant because of his trustworthiness and willingness to handle responsibility. He was an Orderly Sergeant, and eventually was promoted to First Sergeant.

Just prior to the first Battle of Fredericksburg, Virginia, he was doing picket duty at night. Some of the officials (deciding about the merits of his pension claim) questioned why a sergeant was pulling picket duty. Testimony, from several other soldiers and officers, was that EVERYONE in the company was required to do picket duty.

The "Rebels" apparently were spotted that night. The men on picket were running from them, and Milton Powers "jumped a ditch" in the dark and injured his knee. It was tightly bandaged the next day to keep the swelling down, but it sounds like little else was done. This was in the fall of 1862. After that, affidavits note that he was "detailed to the ambulance and hospital train, where he had a horse to ride." In June 1863, Milton came down with typhoid fever and thus missed the Battle of Gettysburg, PA. He was hospitalized until late August, and there is a deposition by David D. Powers of Pittsfield, MA, stating "while he [Milton] was sick with fever, I was sent for, to go and care for him. Not being able to return to the army, he was sent from Ft. Independence, Boston, MA, to Troy, NY on recruiting service with Capt. Francis M. Cooley."

After his bout of typhoid, he began to have dizzy spells or "fits" -- he would collapse and be unable to move, and have a very slow pulse; then later began to lose consciousness during the spells. One doctor noted "uneven circulation"; one speculated on heart involvement, since digitalis eased the condition; and a later one specified mitral valve insufficiency. One of the Army surgeons, early on, thought the spells were "epileptoid" in nature, but all the rest believed it to be his heart.

Apparently he was returned to active duty later, because in May 1864, at the Battle of the Wilderness, his horse was shelled out from under him. The horse died, and also fell on top of Milton Powers. Milton Powers was unconscious for long enough to have been reported as dead by early scans of the battleground. Nobody says how he got out from under the horse. His knee had been re-injured, and one surgeon testified that there had been a shell fragment in it. This fall was when he went deaf from the cannon blast (his hearing later mostly came back) and he injured his right side (same side as the knee), resulting in a "numbness" later diagnosed as partial paralysis. The open wound on his knee apparently never healed well.

Medical affidavits from later years testified to the fact that he was lame, often had to use a crutch, and could not do any heavy labor, suffered lumbar pain, and chronic bladder infections. His "spells" continued, but were not frequent; a laborer who worked for Milton Powers said they were once or twice a year. He'd "sit down and become helpless." [A neighboring farmer in Halifax, Vermont, who testified as to his lameness also mentioned that he "complained a lot."] All testimony from people who knew him before the War stated that he was strong, fit, and in good health. He was a BUTCHER in Williamstown, MA. One fellow, E. A. Dyke, who was a "meat dealer" in North Adams, MA, stated that they worked together as butchers in 1852-53.

Samuel J. May of Pittsfield, MA, said he knew Milton well for 12 years or so before the War, but he doesn't say WHERE. He testifies that Milton was "tough and rugged" before the War.

A doctor named A. M. Smith stated that he "treated members of Milton's family" before the War in Williamstown, MA. Milton mustered out of the Army on October 5, 1864. Captain Cooley's deposition stated that Milton had told him he would have liked to remain in the army, if his health had allowed. He married Ellen D. Mowry on October 25, 1864 -- soon after his discharge -- at the Methodist Episcopal Church in Williamstown, MA, with Reverend Freeman Seymour presiding.

Lucius Mowry of Stoughton, Norfolk County, MA, who was 50 years old at date of deposition 26 Oct 1889. David D. Powers of Pittsfield, MA, 71 at his deposition date on 7 Sept 1892, states that he can remember the date he first saw Milton after his release from the Army as definitely being in October 1864 because he [David] had a son born that month.

L. P. Mowry (Ellen's dad) did three separate depositions, 28 Aug 1882, 20 Oct 1884 and 1 May 1888 (at which time he stated he was 82). He says "Milton Powers came directly from the army to my house in 1864, about the 1st of November. He was a lame and broken down man, but attempted to labor for me, but could not and was obliged to go on crutches on account of his lameness." Note at the time of the deposition Lucius P. was living in Halifax, Vermont, not Whitingham, Vermont. Transcribed by Millie Heym 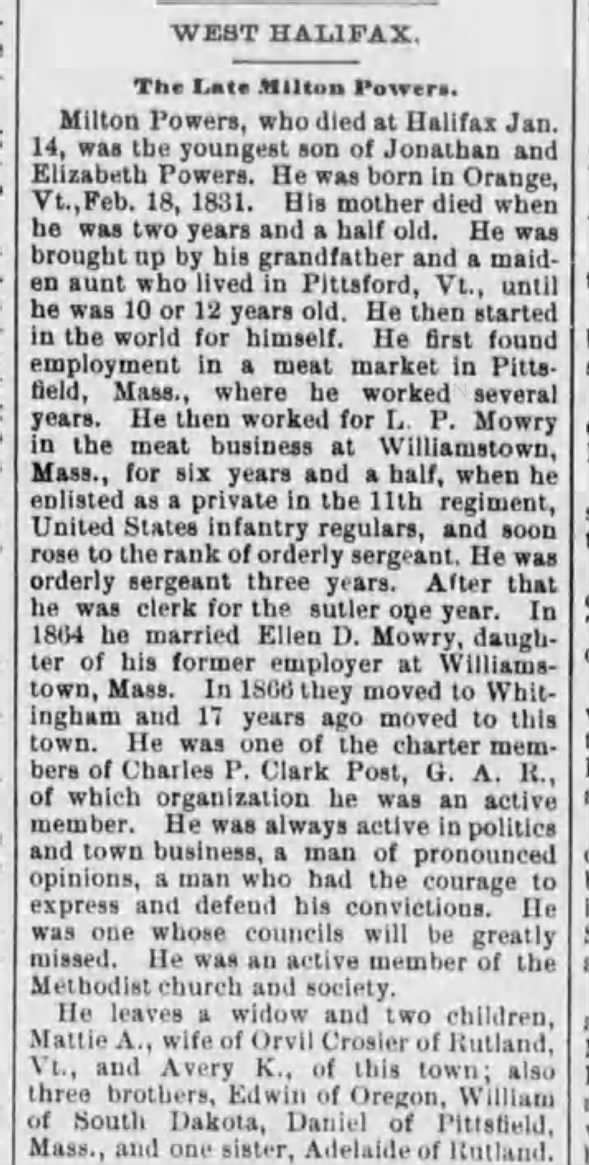