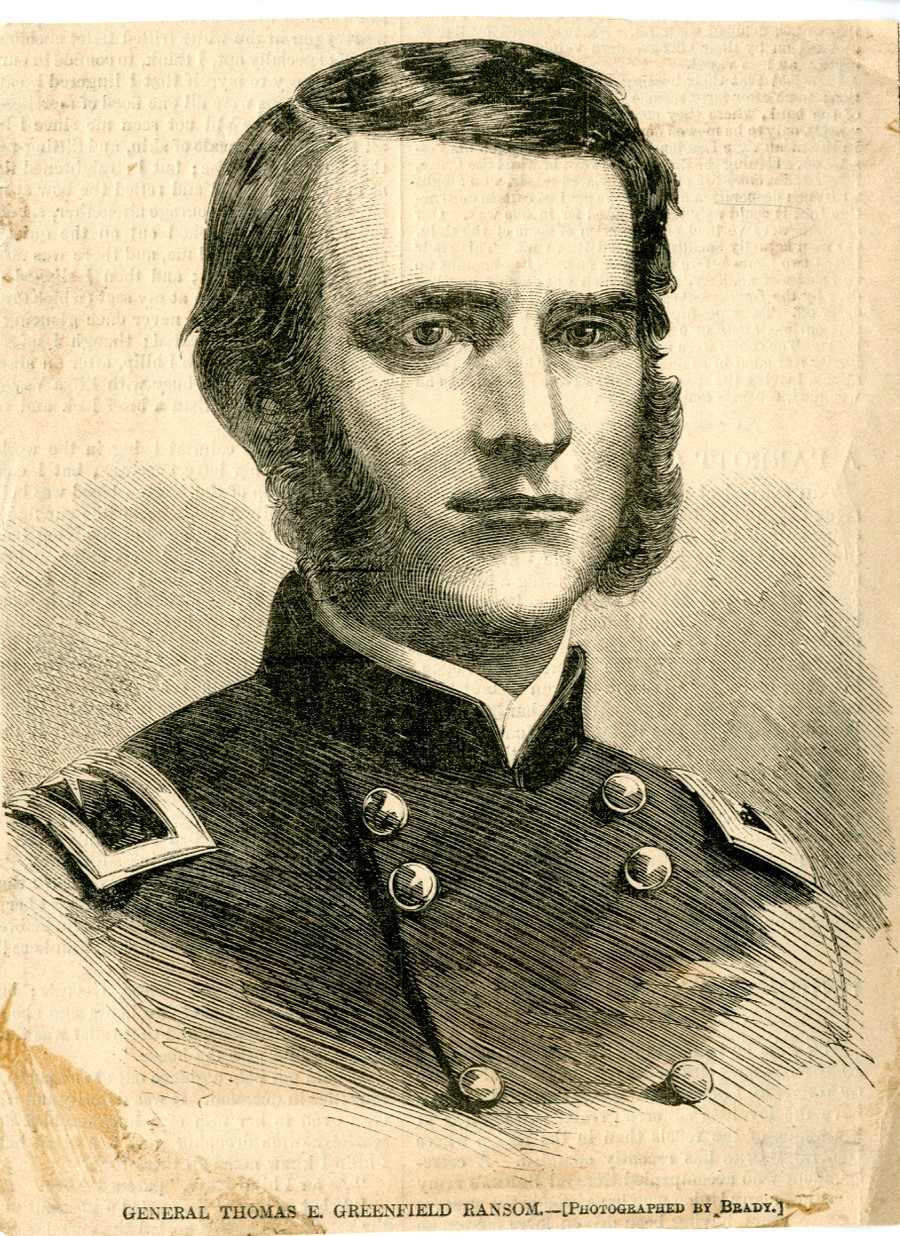 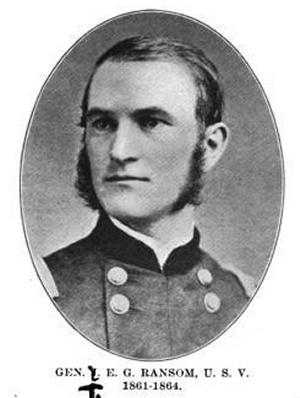 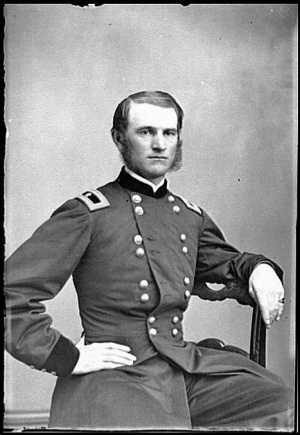 General Ransom was the second son of Colonel Truman Ransom, and was born in Norwich, November 29, 1834. He entered Norwich University in 1848, where he remained three years, then went to Illinois, where he practised his profession of civil engineering and entered into real estate transactions.
At the breaking out of the Civil War he was in the employ of the Illinois Central Railroad, with his residence in Fayette County, that State.
In response to President Lincoln's call for 75,000 troops in 1861, he raised a body of soldiers that became Company E of the Eleventh Illinois Volunteers, and was elected its Captain, his commissioning bearing date, April 6, 1861. He was commissioned Lieutenant Colonel of the regiment July 30, 1861, and Colonel of the same February 15, 1862. In January, 1863, he was appointed a Brigadier General and placed in command of a brigade in General Logan's division of the Seventeenth Army Corps.
General Ransom was severely wounded in the head during the battle of Shiloh, April 6, 1862; and received other wounds at Charleston, Mo.; at Fort Donelson, in 1862; and at Pleasant Hill, La. The last wound was a serious one and caused him to be brought to Chicago for care and treatment.
In the early part of October, 1864, General Ransom was taken severely ill with dysentery, while on active duty in the field although advised by surgeons and superior officers to go upon sick leave, he firmly refused to heed their advise, but continued with his command, and when took weak to ride on horseback he rode in an ambulance.
All this time the disease was making rapid progress towards a fatal termination, then near at hand. General Ransom died October 29, 1864. And thus passed away the young, brave, and handsome soldier, whose reply to friends when urged by them to leave his command, in search of health, was: "I will stay with my command until I am carried away in my coffin"; and when told that he had but a few hours to live, answered: "I am not afraid to die, I have met death too often to be afraid of it now."
It will be of interest to the people of Norwich, and of the state at large, to learn that the Ninth Regiment was not only commanded by Colonel Ransom, but at a later date by Gen. George Wright, a native born son of Norwich, [a notice of General Wright will be found under "Graduates of the U. S. Military Academy," in a previous chapter in this book], and still later by Colonel Liscomb, a Vermonter, who lost his life in China, when the allied forces were storming the walls around Pekin.
Source: M. E. Goddard and Henry V. Partridge, A History of Norwich Vermont, The Dartmouth Press, Hanover, NH, 1905, pp. 242-243.

BRIGADIER-GENERAL T. E. G. Ransom, commanding the Seventeenth Army corps, died at Rome, Ga., on Saturday, October 29th. His disease was dysentery, and death resulted after a severe illness of several weeks. In the Western Army this gallant young general's name has been one to be mentioned with pride, and the whole country is familiar with the story of his rapid advance from the command of a company to that of an important corps. Ransom came of martial stock. His father, Colonel Thomas B. Ransom, fell lat the head of his regiment, the Ninth Infantry, at the storming of Chapultepec, and though the man's young life was not destined to be ended on the battlefield, he bore upon his body the scars of eleven wounds received in actions fought during this war. A native of Vermont, Ransom entered the military service as a captain in the Eleventh Illinois Volunteers, and speedily fought his way up to be its commander. At Belmont, at Donelson, at Vicksburgh, on the Red River, and at Atlanta, he did gallant service, fairly winning, after Vicksburgh, the General's star. For eighteen months, he served on the staff of General Grant, who has on many occasions borne testimony to Ransom's worth as an officer. During the Red River campaign, he came to New York, was nearly healed of his wound, when he applied to General Grant for orders, and received assignment to General Sherman, who recognized his ability by giving him, when General Dodge was disabled, the command of the Seventeenth corps. With that corps he won the highest commendations of his commander for his conduct in the Atlanta campaign, and was recommended for promotion to a major-generalcy. His loss is a severe one to the Army and the country. - Army and Navy Journal.