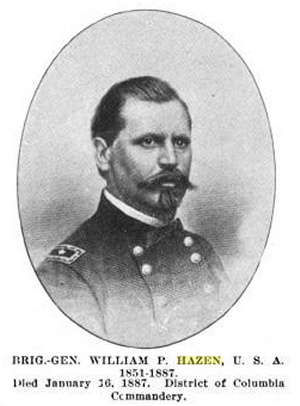 Chief Signal Officer William B. Hazen died at 8 o'clock last evening in his room at No. 1,305 F-street, Washington. Although he had been in bad health for a long time, his death was wholly unexpected up to yesterday morning. A short time ago Gen. Hazen obtained a leave of absence for a year, which time he proposed to spend in resting and recuperating his health. He had been troubled for several years with an affliction of the kidneys, and had at times suf- fered severely. Recently, however, he had greatly improved, and it was hoped that a year's cessation from work would result in his complete recovery. On Thursday evening, Gen. Hazen attended the President's reception. In some way he caught a hard cold that evening, and on Friday he remained in bed with no thought that his sickness was dangerous. On Saturday he was so much better that he sat up during the day, and said he should go to his office on Monday. Late Saturday night the General felt worse, And very early yesterday morning Dr. Phillip F. Harvey, Assistant Surgeon in the army, was sent for. The physician found his patient in an alarming condition, and giving evidence that his blood had been poisoned through diabetes. Dr. Harvey felt that the situation was critical, and at his suggestion Dr. David L. Huntington, also of the army, was called in consultation. Then the relatives of Gen. Hazen, now in Washington, were told that the Chief Signal Officer could not hope for many more hours of life, and they gathered in the sick room. Their hopes were revived during the middle of the day, when the General rallied a little, but in the afternoon he grew steadily worse, and finally sank into unconciousness. Dr. N.S. Lincoln was invited to assist the other physicians at the request of the patient's relatives, but the disease had passed beyond the skill of the doctors, and Gen. Hazen breathed his last at 8 o'clock. At the end he suffered no pain, and he died, without a struggle, of diabetic coma. By his bedside were Mrs. Washington McLean, Gen. Hazen's mother-in-law, and Capt. and Mrs. A. H. Burgher, of Cincinnati, his brother-in-law and sister-in-law. Washington McLean, his father-in-law, was not well enough to attend. Those are all of Gen. Hazen's relatives now in Washington. Mrs. Hazen is in the south of France, where she went a few months ago for her health. With her is the General's only son, a lad of about 10 years of age.

Gen. Hazen had been in the military service since 1855, when he was graduated at West Point and was assigned to frontier duty at Fort Reading, California. For two years he served at different posts in that section of the country and saw some Indian fighting. Then he was transferred to Texas, remaining there until 1859. disabled by wounds, he obtained a leave of absence, returning to duty in February, 1861, as Assistant Instructor in Infantry Tactics at West Point. During that service he was made a Captain. In October,1861, he entered the field as Colonel of the Forty-first Ohio. He remained in the field throughout the war, becoming a Brigadier-General in 1862 and a Major-General in 1864. The brevet of Major-General in the regular army was bestowed on him in March,1865. Shortly afterward he was regularly commissioned Colonel of the Thirty-eighth Infantry, from which he was transferred in 1869 to the Sixth Infantry. In November, 1869 he went to Europe on leave of absence. He was with the Prussian Army during the investment of Paris, and on his return wrote a book called "School and Army of France and Germany." Frontier duty then occupied him until 1877, when he became Military Attache of the United States Legation at Vienna. In 1874 he wrote a book on " Barren Lands in the Interior of the United States."From his return from Vienna until Dec. 15, 1880, when he was appointed Chief Signal Officer, with the rank of Brigadier-General, he spent most of his time in Wash- ington. Gen. Hazen's temperament was aggressive and disputatious. During the latter part of his career, if not in early life, he made his way by a display of these characteristics that did not help his popularity among army officers. He married a daughter of Washington McLean, of Cincinnati, and social influences came to his aid in getting the post of Signal Officer and perhaps in retaining it. It had been filled by a Brigadier-General. Much resentment was accordingly felt in the army that a Colonel should be elevated to it. The agitation at that time in favor of transferring the Signal Service to a civil department had many advocates in the army as a consequence of Gen. Hazen's promotion. His official life bore him a good deal of trouble in various ways, particularly in connection with the ventures into the arctic regions which he undertook to relieve. Of late, however, he had been getting along quietly. He was very pleasantly situated in Washington, living in one of the finest houses in the city - a gift to his wife from her father- and enjoying means for all the social advantages to be had there, of which he was fond.