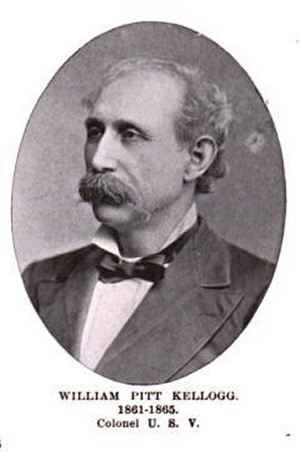 Kellogg, William Pitt, of New Orleans, La., was born at Orwell, Dec. 8, 1831. His grandfather, Saxton Kellogg, married Sallie Fuller, a descendant of Benjamin Franklin, and when a comparatively young man removed from Connecticut to Vermont. His father was the Rev. Sherman Kellogg, a well-known Congregational clergyman, located for many years at Montpelier. Many of his relatives now reside in Vermont and have since an early day been identified with this state.

He was educated at the Norwich Military University. In 1850 he removed to Peoria, Ill., where he read law with E. G. Johnson, a prominent lawyer formerly of Vermont; was admitted to the bar in 1853 and practiced law until March, 1861, when President Lincoln appointed him chief justice of Nebraska.

On the breaking out of the war, at the request of Governor Yates, he returned to Illinois and raised the 7th Regt. of Ill. Cavalry, President Lincoln, at the request of Governor Yates, having given him six months' leave of absence for this purpose. In July, 1861, Governor Yates having commissioned him colonel, his regiment was mustered into service and ordered to report to General Grant at Cairo. Mr. Kellogg was soon after ordered by General Grant to take command of Cape Girardeau, Mo. He was in command of that post until General Pope moved on Fort Thompson, when Mr. Kellogg with his regiment joined him, taking part in the operations resulting in the capture of Fort Thompson and New Madrid until ordered to Pittsburg Landing immediately after the battle of Shiloh. He commanded a cavalry brigade under General Granger, composed in part of his own regiment, in the operations about Farmington, Corinth, and Grand Junction. In the summer of 1862, his health having completely failed, he became so much of an invalid that he was compelled to resign.

President Lincoln having allowed the position of chief justice to remain open Mr. Kellogg returned to Nebraska and remained until January, 1863, discharging the duties of chief justice, when he was requested by Governor Yates to return to Illinois and accompany the Governor on a tour of inspection of the Illinois soldiers in the field. They visited General Grant's headquarters, and on Feb. 15, 1863, Mr. Kellogg was requested by General Grant to proceed immediately to Washington with important papers, from General Grant to President Lincoln. He accepted the mission, and armed with the following pass, written by General Grant, which Mr. Kellogg still retains, he went to Washington and delivered the papers:

The bearer hereof, Colonel Kellogg, is permitted to pass through all parts of this department, stopping at such military posts as he may desire, and travelling free on chartered steamers and military railroads. Good until countermanded.

Mr. Kellogg held the office of chief justice of Nebraska until April, 1865, when President Lincoln tendered him the appointment of collector of New Orleans. Mr. Kellogg continued to serve as collector until July, 1868, when a Republican State Legislature having been chosen, he was elected U. S. Senator from Louisiana, taking his seat July 17, 1868. He served on the committee on commerce and Pacific railroads, was chairman of the committee on levees of the Mississippi river, the first committee on the subject appointed by the Senate under a resolution introduced by Mr. Kellogg. He was the author of the Texas Pacific railroad act, having introduced that bill and was foremost in securing its passage. He remained in the U. S. Senate until the fall of 1872, when having been nominated for Governor by the Republican party, he resigned. The long and notable struggle that followed as a consequence of that gubernatorial contest, resulting in Mr. Kellogg's recognition as Governor of Louisiana by both houses of Congress, is a matter of general history.

Mr. Kellogg served as Governor of Louisiana until June, 1877, when he was again elected to the U. S. Senate, and served as senator until 1883. He served on the committees on commerce and territories, and was chairman of the committee on Pacific railroads. At the end of his second term as U. S. Senator he was elected to the House of Representatives from the great sugar district of Louisiana, receiving nearly the entire vote of the planting interests of that district. In 1884, at the expiration of his term in the House, Mr. Blaine having been defeated for President, Mr. Kellogg retired from active politics.

He was one of the 306 delegates who voted for General Grant to the last in the national convention of 1880.

He was married, June 6, 1865, to Mary E., daughter of Andrew Wills, who emigrated at an early age to Illinois from Pennsylvania, and who was a member of the famous Wills family connected with the history of Gettysburg, Pa. They have no children. Mr. Kellogg has four sisters residing in Iowa and one sister and a brother residing in Kansas-they all have children.

Mr. Kellogg now resides a portion of the year in Louisiana, where he is connected with sugar planting, and the remainder of the year in Washington, D. C., where he has large real estate interests.