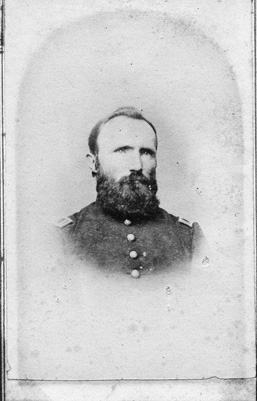 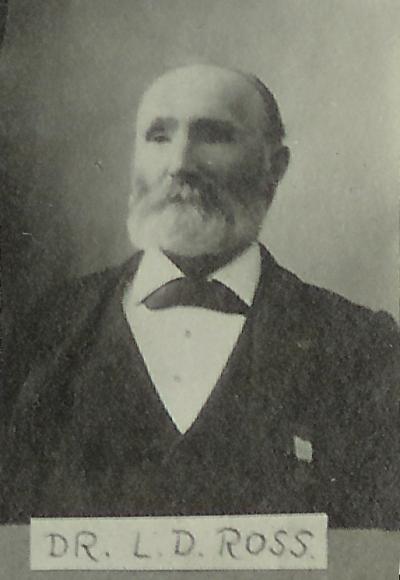 Obituary of L. D. Ross
By M. H. Eddy, M. D., Middlebury.
Dr. Lucretius Dewey Ross was the only child of Paul M. and Charlotte Dewey Ross, and was born in East Poultney, July 4, 1828. When a young man he fitted himself at Troy Conference Academy for college, and entered Middlebury College in 1848, graduating with honor in 1852. In 1857 he received the degree of M. D. from Castleton Medical College, and engaged in the practice of medicine at East Poultney, where he remained until the war broke out. He enlisted in the Fourteenth Regiment Vermont Volunteers, remaining in the service until the close, when he returned home and resumed practice in East Poultney for one year. He then moved to Benson, where he remained until the spring of 1869. Returning to Poultney he continued in his profession and settled in the house where he died,living there continuously. Dr. Ross was married July 4, 1850, to Ada C. Baldwin, and six chillren were the result of this union, all living, two of whom are successful physicians of this State. He died at his residence on Monday morning, Aug. 25, 1902.
Dr. Ross has always been an active participant in town affairs, having held several offices. He was for many years town superintendent of schools, and served as school committeeman for many terms. The doctor was kind and generous, though unpretentious, and when in health never neglected a call to the sick. His practice was large, his friends numerous, and his goodness will be held in remembrance by legions. The funeral was held from his late residence on Beaman street on Wednesday afternoon, Aug. 27, Rev. I. E. Usher, pastor of the Baptist Church, officiating. The G.A.R. had charge of the service at the grave. The bearers were Dr. Lape of Fair Haven and Drs. Horton, Ellis, Lloyd and Clough of Poultney.
Source: Transactions of the Vermont State Medical Society for the year 1902, (Free Press, Burlington, 1902), p. 249.