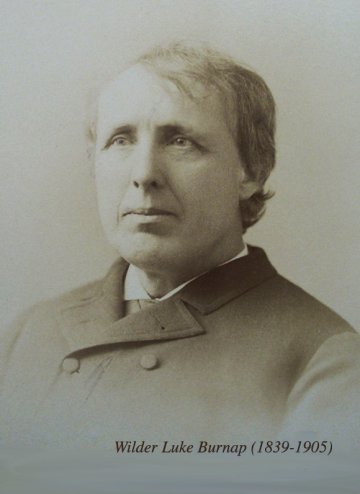 Wilder Luke Burnap was born in Conajoharie (Montgomery County) New York, 3 Sept., 1839, son of Luke and Abigail Burnap. His father was a miller by trade. Luke and Abigail (Robbins) Burnap moved to Grafton, Vermont when Wilder was just a small boy. He bought a gristmill and operated it with the usual "old fashioned attachment" common at that time, an up-and-down sawmill. Farmers from miles around came to Burnap's to have their grist ground into flour, meal and provender, and logs sawed into lumber to build homes in the community. When Wilder was twelve years old, his father once put him in charge of the mill and was thoroughly disappointed when on this occasion the son had become so engrossed in reading his book that he forgot to shut off the gate when the saw had run its course, and was startled to hear the saw grate against the iron dog at the end of the log. Wilder's love of study and books convinced his father that his son would never follow his footsteps in the milling business. In district school, Wilder studied with an endless desire to learn more, often times studying Latin and Greek after hours in the evening with the local minister. When he was 16, he attended two or three terms at Leland Seminary in Townshend, Vermont. He passed his examinations and was enrolled as a freshman at Dartmouth College in 1859. The class historian once wrote: "there was nothing sleepy about him from the fall of 1859 to commencement in 1863. He was as muscular as any modern athlete and if any fellow got the better of him in football or any other game, that fellow must have caught him unaware. His observation was keen and his memory perfect.
When the Civil War broke, Wilder was in his junior year. He advocated the forming of a college company of cadets for drill and perfection in the use of arms. When the company of "College Cavaliers" was formed under Captain S. S. Burr the members were mainly from Dartmouth and Norwich University which was then located across the Connecticut River. These young men were assigned as Company "B" in the Seventh Squadron of Rhode Island Cavalry, and spent three months on a campaign in Virginia and Maryland. Mr. Burnap was not sick a day during the time, yet he had some rather rough experiences. The first time he responded to the order "Boots in Saddle!"
He obeyed the order although he had never ridden horseback before. He leaped into the saddle and stuck his legs out too loosely. Then he hugged his legs too tightly and thrust his spurs into the horse's sides with caused the horse to rear up on his hind legs and then on his fore legs. Wilder tried to hold on, but he was rolled off over the horse's head and fell sprawled out on the ground. The horse left him there and galloped off to the stables. Fortunately the rest of the troopers were so busy minding their own steeds that no one had a chance to laugh at him except Captain Burr and the Major in command. It must be said, though that it was not long after this that Mr. Burnap became one of the best riders in his company.
The men saw service about Harper's Ferry and at Antietam. His camp fellows in "Tent No. 3," when in the field in Shenandoah Valley, were noted for their readiness.
It is said they were the jolliest, dirtiest and healthiest crew that lay under a Sebley tent in that beautiful valley. Burnap often times was the cook and was noted for concocting mixtures of flour, water and salt which he cooked by the campfire. His cakes, sweet with molasses, were in great demand. Burnap served on picket and scouting missions many times and his keen eyesight helped bring in bushwhackers rummaging F. F. V. mansions for contraband articles of war. A couple of times, Burnap and his men rounded up parts of herds of cattle they managed to steal from Confederate troops on their way to feed the Rebel Army. Among his fellow cavalrymen, Burnap was know as "The Bald Eagle." The history of this Dartmouth cavalry and squadron was written up later by Mr. John Scales in the Dartmouth Literary Monthly for June, 1893 (page 400). Also see: History of the Seventh Squadron, Rhode Island Cavalry by Augustus Whittemore Corliss and Henry Elijah Alvord, 1879.

On his return from the war, Wilder continued his study at Dartmouth and was admitted to the exclusive society, Phi Beta Kappa. He graduated with honors in 1863. He then went to Burlington, Vermont where he commenced the study of law in the office of Solomon Wires. He afterwards studied in the offices of Wales and Taft. He served as Register of Probate under Judge Wales. He was admitted to the Bar in 1866, and in 1868 opened his own law office. He specialized in bankruptcy and Federal law. His office was his workshop and his books were the tools of this trade. He was a great student and loved the law. No man of his time stood higher in Vermont courts or in the esteem of the Bar Association of the state.
Wilder married 11 May, 1870, Fannie L. Castle of Burlington, Vermont. They had three sons: Robert Lord, James Wilder and Clement Foster, and one daughter, Julia R., who died at the age of three years.
In 1872, Attorney Wilder was elected States' Attorney for Chittenden County. In 1882, he was elected State Senator from Chittenden County, and also held minor offices in the City of Burlington such as grand juror, city assessor, school commissioner, etc. In 1885, he was appointed Professor of Medical Jurisprudence in the Medical Dept. of the University of Vermont. He remained in this post for ten years but resigned to take care of his busy law practice. In 1903 he was elected president of the Vermont Bar Association.
On Wednesday, 7 June, 1905, after a day spent in his law office engaged in the general routine of his professional duties, he felt unusually well and closed his office and went home. He spent the evening with his family as was his usual custom. Before morning he was seized with extreme pains in his right side. On calling the family physician, his condition was attributed to a sharp bilious attack and he was given the usual remedies. His condition declined and the following Friday the physician decided he had appendicitis. He was taken to a local sanitarium and early Saturday morning he was operated on, but the internal abscess was so serious to complete it. It was hoped he might survive the poisonous virulence, but severe hemorrhages and other complications set in and he lingered along between alternating periods of hope and fear until 7 July, 1905, when he died at the age of 63 years. Attorney Wilder was conscious to the last and fully realizing the inevitable, bade good-bye to his family and passed peacefully to the great beyond.
He was buried in the Lake View Cemetery.
Courtesy of Linda M. Welch, Dartmouth College

He was graduated from Harvard in1863, subsequently serving in the army in a three months' company recruited from the students of the college.

He studied law with Wales & Taft in Burlington and in 1866 was admitted to the bar of Vermont. He then went to Iowa, where he practised for a short time, returning to Burlington to reside.

He was made register of probate and later opened an office in the courthouse building, which he has since occupied.

Mr. Burnap was married to a daughter of C. A. Castle. Mrs. Burnap and three sons, Robert, James and Clement, survive him.

Mr. Burnap held many offices of trust during his life. He was state's attorney of Chittenden county for a term, was state senator in 1882, and held the offices o city attorney and school commissioner at various times.

For several years he was professor of medical jurisprudence in the medical department of the University of Vermont, and at the time of his death he was president of the Chittenden County Bar Association and also of the Burlington Law Library association.

He was a lifelong Republican and prominent in the social clubs of the city, being president of the Algonquin club. He was an eloquent and logical speaker, and had a judicial mind and strong convictions. During his career he conducted some of the most important criminal cases in this part of New England.