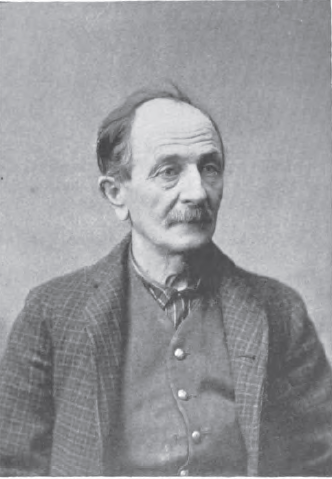 James Evans, popularly known by the cadets as ''Uncle Jim," was born in Ebbw Vale, Monmouthshire, South Wales, June 26, 1833. At the age of twenty-seven he emigrated to this country, landing in New York City, July 29. 1860. From this time until the breaking out of the Civil War, he was employed at trade as a puddler in the iron regions of Pennsylvania. Soon after President Lincoln's first call for troops he enlisted in Co. E, 41st Ohio Vols., and fought with his company at Shiloh. Corinth, Perryville, Wildcat, Stone's River, McMenville, and Chickamauga. He was taken prisoner at the latter battle. September 20, 1863, while assisting a wounded comrade off the field. He was a prisoner of war fifteen months, being confined in the prisons in Richmond, Danville, Andersonvi11e, Charleston, and Florence, South Carolina. He was exchanged December, 1864, and the May following enlisted in the 5th U. S. Infantry for three years, and served on the "plains" under Captain Charles A. Curtis, '61. He came to Northfield with that officer in September, 1869. and began his duties as janitor, a position he has held ever since. Until 1871 he lived in the " Barracks."

"Uncle Jim " has ever proved a faithful officer to the university, during his service of twenty-eight years, and is respected and loved by the entire body of alumni and past-cadets. He is active in the G.A.R., and has been Commander of William H. Boynton Post, No. 94, Department of Vermont. He is also a member of the Odd Fellows.

Northfield, Jan. 9. - James Evans, a janitor at Norwich University and familiarly known as “Uncle Jim,” among the students at the university, died yesterday morning at 1 o'clock. He has an enviable war record, having fought at Shiloh. Corinth, Perryville, Wild Cat, Stone's River and Chickamauga. He was a t one time taken prisoner by the Confederates and spent fifteen months in a number of different prisons among which was Andersonville. He was respected and loved by alumni and cadets.