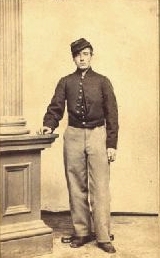 The death of Edgar H. Wood of Kendall avenue, for 40 years a resident of Rutland, veteran of the Civil war and 20 years a local pension attorney, occurred yesterday morning at 2 o'clock at his home. On May 11 last Mr. Wood was knocked down by an automobile, suffering a compound fracture of one leg and serious bruises. He was confined to bed for many weeks and had been about the streets only a short time when, about six weeks ago, he was taken ill again. Since that time he had failed slowly until it was realized, several days ago, that he could not recover.

Mr. Wood was born in Rockingham, December 12, 1844. When 18 years old he was employed in Keene, N.H., where he enlisted in Company B, First New Hampshire cavalry, with which he served as a bugler. During the year which he spent in the service Mr. Wood participated in 22 battles. He was discharged for disabilities May 26, 1865. His injuries were caused when his horse was shot from under him, several ribs being broken. For three days he traveled on a blacksmith's forge on wheels, drawn by mules over rough roads, before reaching camp where he was given medical attendance. He was later sent north to a hospital in Brattleboro and received his discharge when he left that institution.

Taking up his studies at Woodstock academy, Mr. Wood attended that school about a year. He was then employed in New Hampshire towns for a time, going thence to St. Johnsbury. When the Howe Scale works were moved to Rutland in 1878 Mr. Wood came here, by way of Brandon, where he spent a few weeks. For 12 years he was employed by the scale company as an electroplater.

Mr. Wood was a charter member of Perry post, G.A.R., of Lebanon, N.H., and was transferred to Roberts post of Rutland. In 1904 he was elected commander of Roberts post. He was high in the Masonic order also, having been a member of Killington commandery, Knights Templar, and of Cairo temple, A.A.O.N.M.S.

Mr. Wood was probably more closely associated with the interests of Civil war veterans than any other Rutland man through his long period of service as pension attorney.

Mr. Wood is survived by his wife, formerly Miss Leonie A. Houston of Enfield, N.H., to whom he was married May 9, 1869, and one daughter, Mrs. Louis W. Fuller of Rutland. He also leaves three brothers, E.T. Wood of Lyndonville, Fred A. Wood of Rockingham and Henry Wood of Claremont, N.H., and a sister, Mrs. Flora A. Cassidy of Bellows Falls.

The funeral will be held tomorrow afternoon at 2 o'clock at the house.