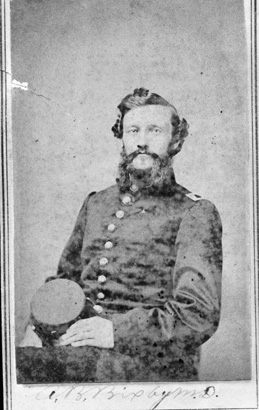 He is of English descent on both sides and is of the seventh generation from Joseph Bixby, who emigrated from the mother country in 1637 and settled in Massachusetts. The English branch of the Bixby family are of Danish origin. On the Stoddard side he is of the sixth generation from Anthony Stoddard who came from London to Boston in 1639. Anthony Stoddard was a descendant of William Stoddard, a knight who came from Normandy to England, A. D. 1066, with William the Conqueror, who was his cousin.

While he was still an infant his parents moved to Shellersville, O., where both of them died, leaving him an orphan at the age of seven years. He returned to Vermont and obtained his support by labor upon the farm during the summer, while devoting his winters to attendance at the district schools. At the age of nineteen he decided to educate himself as a physician. Commencing his preparatory studies at Black River Academy, Ludlow, and Kimball Union Academy, of Meriden, N. H., he entered Castleton Medical College from which he graduated in 1858, completing his course at the College of Physicians and Surgeons in New York. He began his professional labors at Londonderry in 1860, and built up a large and extensive practice in that and the adjoining towns. Obeying the call of duty, he offered his services to the government and was made assistant surgeon of the 4th Regt. Vt. Vols., continuing in the army from Oct. 6, 1862, to Sept. 30, 1864, when he returned to his former labors. In 1882 he was compelled to abandon his practice on account of ill health and removed to Poultney, where he now resides.

In his religious belief Dr. Bixby is a liberal Baptist. He has always been an active worker in the church, but his labors have never been characterized by narrow sectarianism. For some years he was a licensed preacher in the Methodist church and labored as a revivalist with marked success.

During the agitation of the slavery question he was a strong opponent of that institution and has ever acted with the Republican party till 1884, when he withdrew and became an active Prohibitionist. He was a member of their state committee for a number of years and chairman of the state convention of 1888. He was sent as a delegate to the national convention which nominated Clinton B. Fisk for the presidential chair. His eminent qualifications for official position were demonstrated by the fact that he was the choice of his constituents for the position of state treasurer in 1888 and his popularity was evinced by his running ahead of his ticket. He also received the nomination for the position of judge of probate for Rutland county in 1892. In the presidential campaign in 1888 he took the platform and advocated the principles of his party in nearly all parts of the state, speaking eloquently and effectively.

Dr. Bixby was united in marriage March 17, 1857, to Annie, daughter of Luther and Polly (Hemmenway) French of Mt. Holly, who died June 10, 1860, leaving one daughter, Lola Ann. He married for his second wife, Oct. 9, 1862, Elnora E., daughter of Lewis and Mary (Aiken) Howard of Londonderry. One daughter has blessed the union: Salome Eliza.

Dr. Bixby is pre-eminently a self-made man, who, left an orphan in early childhood, yet struggled successfully to educate himself and by unaided efforts attained an honored position in the community. Independent in idea and action he is respected by all who know him for the probity of his life and character and has always proved himself a firm friend to those in adversity and a kind and considerate neighbor; of him it can be truly said in the words of Sir Henry Walton, "his armor is his honest thought, and simple truth his highest skill."