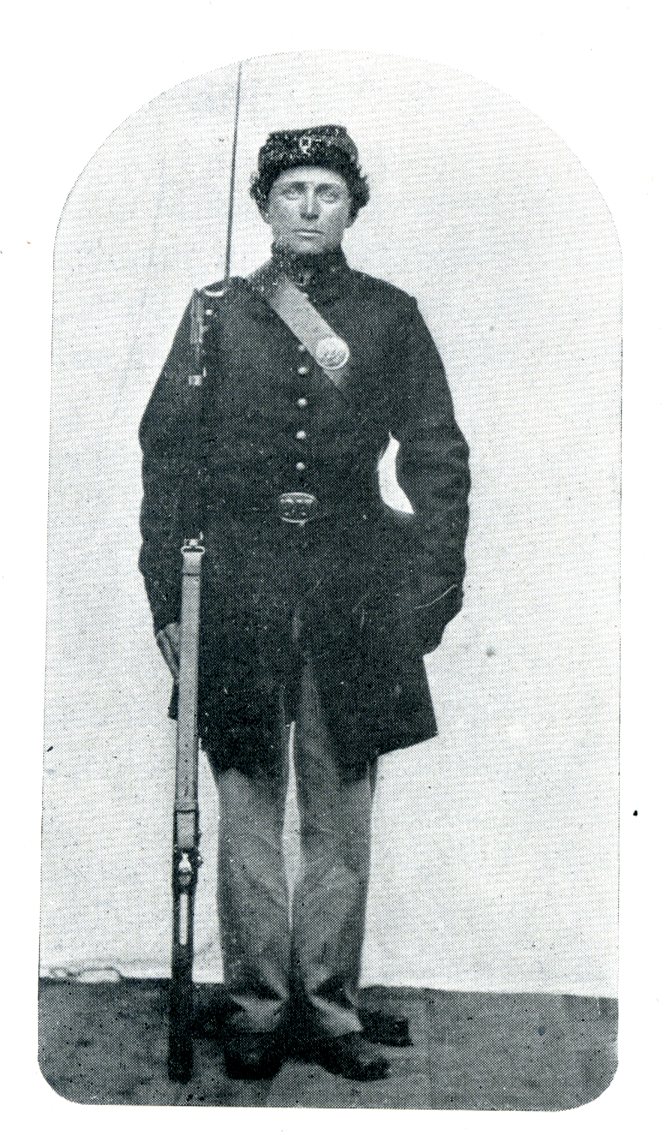 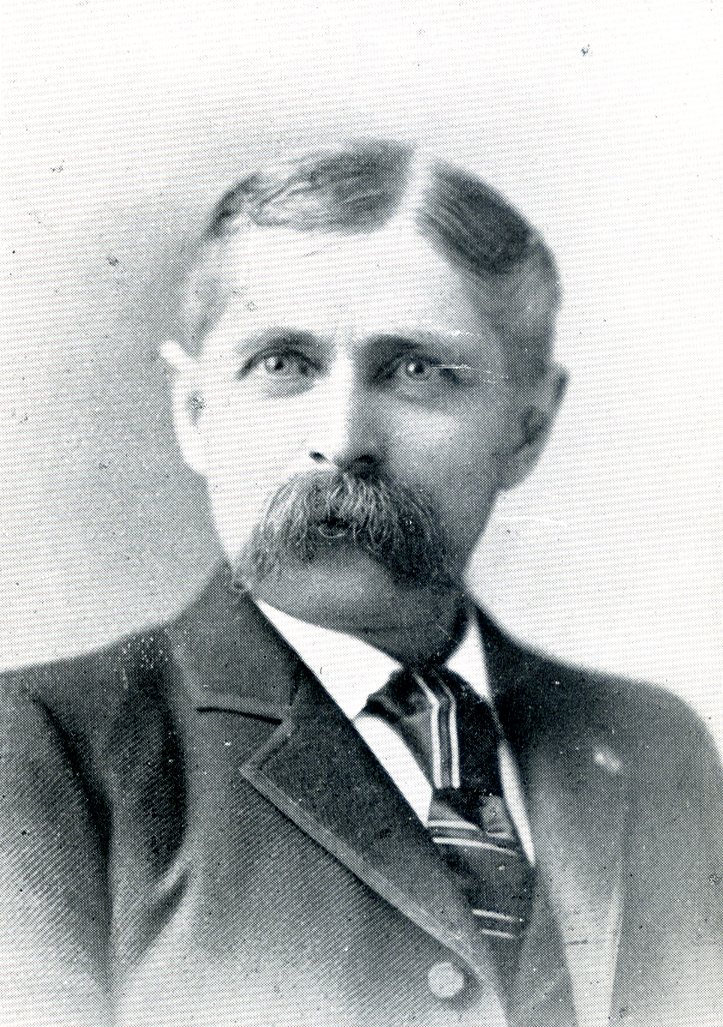 I was born in the town of Westfield on the 17th day of August, 1841, and lived in the above named town and worked as a farmer until I was 21 years of age. On the 23rd day of August, 1862, just one week after having reached my majority, I enlisted in Captain John Lonergan's Company A, the 13th Regiment Vermont Volunteers, and served as corporal. I enjoyed good health while in the service and was present with the company and ready for duty all the time, Including the march that brought the regiment to the battlefield of Gettysburg, where I was wounded during Picket's charge on the 3rd day of July, 1863. Sergeant Henry having reported to the Captain that I was wounded, was soon taken to the rear for surgical attention. My wound was not serious but was detained in the hospital and did not reach Brattleboro until after the regiment was mustered out and gone home. I was discharged by Major Austine on the 23rd day of July, 1863, and reached my home in Westford at 12 o'clock, midnight of the same day. I remained at home waiting for the wound to heal until the 14th day of the following September when I went to Boston, Mass. Here I engaged in the teaming business until November, 1879. Having met with an accident was compelled to give up my business. In April, 1886, not having fully recovered from my injuries, deemed it wise to return to Vermont, and moved with my family to Essex Junction, Vt. I here formed a partnership with Mr. Place in July, 1888, and we engaged in the tin and hardware business and continued with fair success until burned out January 1st, 1893. My health not being very good suffering from service in the army and injuries received in Boston concluded to retire from active business. I have in recent years served as trial justice to the present time, February, 190.5.

I was the son of Timothy and Abby (Davis) Sibley. I married Diantha Seavey, daughter of Jacob and Eliza (Eaton) Seavey, November 6th, 1867, her place of birth was Brookline, Maine and date April 8, 1843. Our union was blessed with a son and daughter, Fred Stanley, born in Boston, Mass., May 15, 1870, and Lottie Mary, May 15, 1874. Our daughter died at Essex Junction, Vt., February 9, 1890. Our son is living (1905) in Medford, Mass. My experience as a soldier was similar to the rest of the boys of the 13th Regiment until the battle of Gettysburg. I never can forget the awful scenes of carnage during the battle and it is a wonder that any escaped alive. Others more fluent with pen have no doubt written of the sanguinary struggles in which our regiment took part and while I might say something personal refrain, thinking it might be said I am vain. Indeed I am proud of freely offering my young life in the service of my country and that I was permitted to take part in that great battle of victory which was the turning and most Important battle of the Civil War. I am and ever have been thankful that I was born in Vermont, was a volunteer in the 13th Regiment, Vermont Volunteers, and that I have lived to realize that the boys that wore the blue saved and perpetuated the best and most humane government of history. I am now 64 and know the final call is at hand I hope to be buried in sight of old Mansfield, which mountain from earliest recollections commanded my love and admiration and it overlooked the modest home where I was born. In closing I am glad to say to my dear comrades of the 13th that I am proud of their heroic deeds and the record they have made since the war. May you live long, be happy and die respected. We shall all see each other when gathered on that eternal camping ground where all is peace and love. Good Bye,

Torrey W. Sibley (now deceased) was a noble specimen of Vermont's most gallant and valiant sons. His life was upright and blameless and was beloved by all who knew him. His blood was shed on the gory fields of Gettysburg as a sacrifice for his country. He was gentle, generous and kind, genial and greeted all with a warm hand, joy and gladness beaming in his eyes. In camp he was gentle as a lamb, in battle as fierce as a tiger. He is missed at our annual reunions and surely will not be forgotten. Let all cherish his memory and emulate his virtues. It is with pleasure that I offer this tribute in behalf of my brave and gentle comrade. 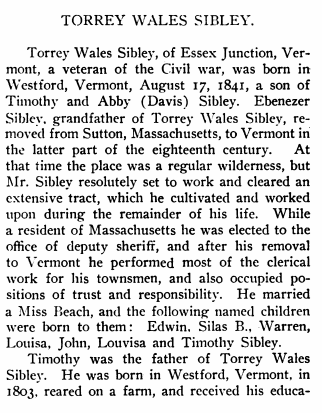 Genealogy and Family History of the State of Vermont, Hiram Carleton, Volume 2, Pages 133-4

Torrey W. Sibley, aged 66 years, a prominent citizen of the village, died at his home on School street Monday night. Mr. Sibley was born in Westford and during his early life was engaged in farming Newport barracks on the 17th inst., of some brain disorder. Major with his father. At the age of 21 years he enlisted in Co. A, 13th Vt. Vols.