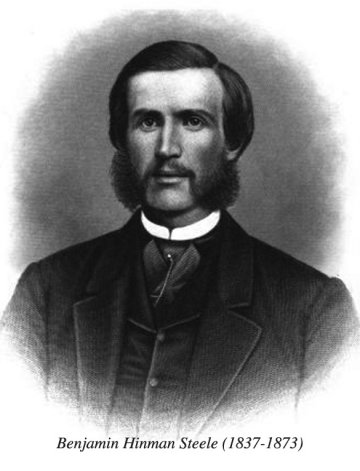 Benjamin Hinman Steele was born in Stanstead, Canada East, 6 Feb., 1837, son of Sandford and Mary (Hinman) Steele. Ben's grandfather was Zadock Steele, the noted "Indian Captive" of Royalton, Vermont. Ben prepared for college at Derby Vermont Academy and also at the College de Saint Pierre and at Chambly, Quebec. He entered Norwich University in Norwich, Vermont in 1853 and remained there for one year. He entered the Sophomore class of Dartmouth College and graduated in 1857 as valedictorian of his class. He was a member of Psi Upsilon and Phi Beta Kappa Fraternities.

While at Dartmouth Steele kept up his interest in military matters and organized and drilled "The Dartmouth Grays" a company made up of the Class of 1859 which included Henry Bridge Atherton, Wheelock G. Veazey, Fisher A. Baker, Edward Cowles, and others. It was largely through this military training that many members of this class were enabled to obtain commissions during the Civil War. Steele's Dartmouth men presented him with a cane with the Latin inscription on the silver-tipped handle of the walking-stick "Post Proelia Praemia" -Reward after Battle. The cane was later donated by Steele's brother to Dartmouth and it was attached to the Roll of Honor of those men of the Green who constituted the Dartmouth Greys in

1849 with the inscription: "The Dartmouth Greys, An Undergraduate Military Company in the Class of 1859, Precursor of Many Patriotic Groups Through Whom the Spirit of the College Has Expressed Itself in Loyal Service to the Nation." Dartmouth was later honored with a gift of Sanford H. Steele, brother of Ben, to build the Steele Chemical Laboratory which was opened in 1923. Steele Hall houses Dartmouth's Chemistry Department.

Ben excelled in college and began immediately the study of law in the office of Hon. John P. Sartle of Barton, Vt. He also worked as principal of Barton Academy.

He was very proficient in his studies and was able to graduate LL.B. at Harvard Law School in the winter of 1858. He was admitted to the bar of Massachusetts at Boston, but his health became impaired. He was soon prostrated with sickness and had to suspend his studies for a time. Not ready to settle down, he returned to Canada and studied French law for a few months in the office of Honorable J.

S. Sanborn. He was admitted to practice his profession in Canada and to the Orleans Vermont County Bar in 1858. He decided to settle a practice at Derby Line, Vermont.

He was never very robust or hardy himself and could not pass the physician for service during the Civil War in the front lines. Instead, he served as colonel on the staff of Governor Erastus Fairbanks from 1861 to 1863. He was troubled considerably with a serious catarrhal difficulty, and constant speaking often brought on bronchial inflammation.

Mr. Steele was not an active politician in his early years, only having held the office of postmaster at Derby Line during President Lincoln's administration, until he was appointed judge of the Vermont Supreme Court in November 1865 by Governor Dillingham. He was then only 28 years of age and was the youngest man ever appointed to the bench of Vermont up to that point. His court decisions are among the clearest and ablest in our Vermont reports. He held the position of Judge until 1870 when, much to the regret of all, he declined a re-election. He had removed to St. Johnsbury, where he lived while he was in the Supreme Court, but upon his retirement, he moved his family to Hartland, Vermont. In 1870 he was appointed a member of the State Board of Education where he was an influential member. He was a delegate to the National Republican Convention at Philadelphia in 1872. He ran for Congress but was defeated.

In March of 1872, Judge Steele went to New York City seeking medical treatment for his chronic condition. For some time everyone thought he was improving in health, but he grew steadily worse. In May he returned home to Hartland, and a few weeks later he started for Minnesota, hoping that the climate there might be more beneficial for him. He stopped at Fairbault, and for a time he was improving, but he soon had several attacks of hemorrhage from which he was laid low. He died in Fairbault on Sunday, 13 July 1873 (age 36 years). He left a widow, a daughter Mary (age 10) and a son David (age 2).

DEATH OF JUDGE STEELE - Benjamin H. Steele of Hartland, Vt., died at Fairbean, Min., on Sunday last, and the funeral will be attended at Hartland on Friday. Judge Steele was very fortunate in his endowments and disposition, of the most genial temper, quick of perception, and accurate in judgment. He early took high rank in his profession, and upon the appointment of Judge Poland to the United States Senate, he was appointed by the Governor to a seat upon the bench of the Supreme Court of this State, when but a little over thirty years of age. As a member of that august and learned tribunal, he shone forth as one of its most brilliant lights. As a presiding Judge of Windsor County Court, he was particularly conspicuous by reason of his quick apprehension of legal points and his clear and logical manner of submitting questions of fact to a jury. This has passed away one of the brightest lights of the State. One whose promise of honor and usefulness was ahead of all others of his age, a man loved by the people and fully competent to adorn any station to which he might be called. His disease was consumption.