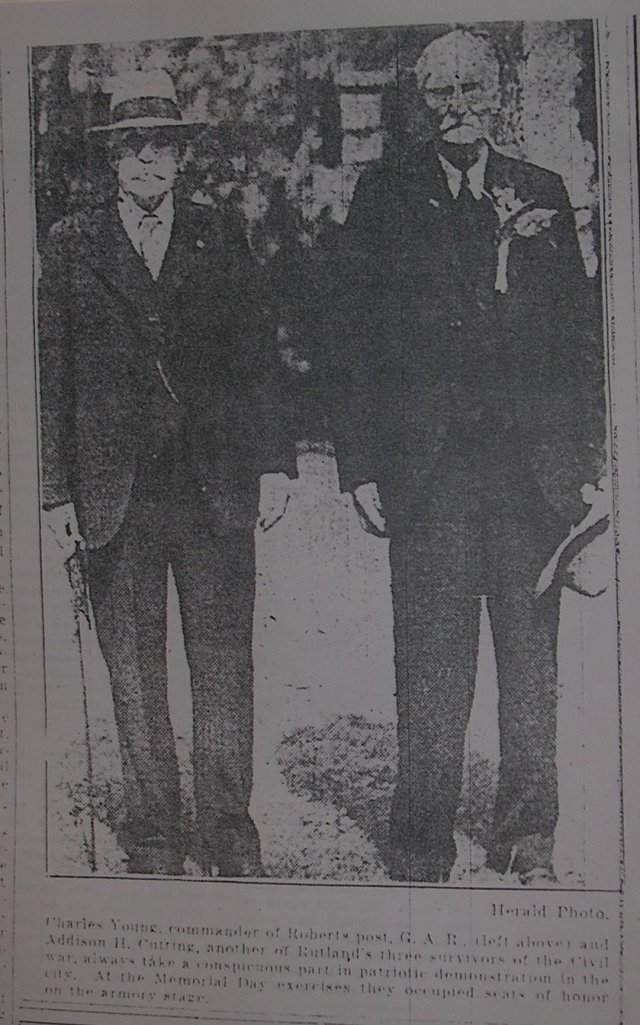 With Memorial Day over, members of local patriotic societies emphasized the fact yesterday that only two survivors of the Civil war had been able to attend exercises here in the city as a mark of respect for their dead comrades.

There is a third member of the post, Alonzo Levins of West street, a private in Company H, Sixth Vermont Volunteer regiment of the Civil war, who was unable to attend the exercises Tuesday.

Charles Young, who served as musician in Company A, 17th Vermont Volunteer regiment, has the distinction of being the youngest Civil war veteran now living in Vermont. Music occupied his attention for many years after the war and he was one of the early members of the Rutland City band, playing the kettle drum in the organization. Young was in the employ of the Howe Scale company for a long period. He is now Roberts post commander.

Addison Cutting, a survivor of Company D, 19th United States infantry, in which he served as a private, has been a resident of this city for many years.

"This is my last Memorial Day. I want to be present at the exercises," Addison H. Cutting of Pearl street, 87, Civil war veteran, told members of his family as he left home for the services on May 30. It was his last call to colors. He died at his home at 12:30 o'clock yesterday afternoon after a week's illness.

The tall, straight, white-haired veteran of the rebellion, who, for more than a quarter of a century, took a prominent part in the Grand Army services for departed comrades, will be buried with military honors in Evergreen cemetery Thursday afternoon. There are now only two surviving G.A.R. men in Rutland.

Funeral services for Mr. Cutting will be held at his home at 2:30 o'clock Thursday afternoon.

Private Cutting enlisted on April 18, 1864 with Company D, 19th United States Infantry regiment. On July 28, 1865 he was discharged at Lookout Mountain, Tenn., by reason of a surgeon's certificate of disability, showing that he had been seriously wounded in action. He served under Capt. Thomas Cummings.

Addison H. Cutting was born in Alstead, N.H. on August 26, 1845, the son of Mr. And Mrs. James Cutting. He attended the Alstead public schools. It was in that own that he learned the stone mason's trade, which he followed until his retirement about 22 years ago. He came to Rutland about 29 years ago.

The veteran is survived by three sons, Walter J. And Addison H., jr., both of this city, and Charles H., of Hayward, Cal.; four daughters, Mrs. Mabel S. Davis of Fair Haven, Mrs. Daisy M. White of Albany, N.Y., and Mrs. Luella M. Martin and Mrs. Leona B. Parsons, both of Rutland; also 21 grandchildren and 10 great-grandchildren.

In addition to being an active Grand Army man, he was an honorary member of Rutland lodge of Elks.

RUTLAND, June 19. - One of Rutland's three surviving Civil War veterans, Addison D. Cutting, 87, retired stone mason, died this afternoon at his home. He was a survivor of a company of the 19th United States Infantry. He was a native of Alstead, N. H., and enlisted on April 18, 1864.

He was mustered out at Lookout Mountain, Tenn., after being wounded. He had resided in Rutland for 29 years and was an active member of Roberts Post, G.A.R., of this city.