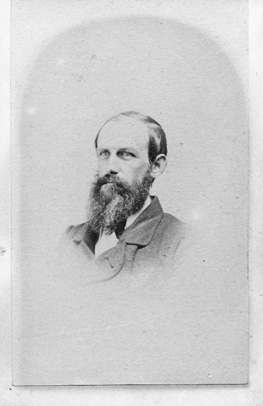 Bennington Banner
December 22, 1905
LIEUT CHAS M. BLISS DEAD
One of Bennington's Best Known Citizens.
VETERAN OF CIVIL WAR
Took a Leading Part in the Erection of the Battle Monument Here.
Charles M. Bliss, a prominent and widely known resident of the village, died at his rooms in the Putnam house last evening. Had he lived until New Years day he would have been 80 years old. He had been in poor health for several months, in fact was never strong, but had been confined to his room for only a few days. It had been decided to take him to the Soldiers' home hospital yesterday but the inclement weather prevented.
He arose from his bed, partially dressed himself and sitting down on the side of his bed fell back dead. Death came just as he would have chosen it, peacefully and quietly.
Mr. Bliss was born in Hartford, Conn., and was a graduate of Yale in the class of 1852. He intended to become a teacher and accordingly after his graduation made a trip to Europe, being absent about two years, which time he spent in study in France and Italy, after his return filling various positions.
About 1857 for the benefit of his health he came to Woodford, where he purchased a farm. For several years he was engaged in the lumber business in that town and it was while there that he married Miss Adelle Godfrey of this village. His wife died within a few years. Later he was for a few years connected with the Lincoln Iron Works of Rutland and after his retirement came back to Bennington and since that time has devoted a good share of his time literary pursuits.
Mr. Bliss was a veteran of the civil war. He enlisted in Bennington in Company A, 2nd Vermont, and it has been stated by historians that his was the first enlistment in Vermont under the call for three year enlistments. He was appointed a sergeant June 20, 1861 and lieutenant in September. He resigned because of ill health in October, 1862. He was a member of Post Newton stone but since that went out of existence he has not been connected with any society except his college fraternity.
In 1871 he established the Bennington Free Press and edited and conducted it until the fall of the next year when it became the Vermont Gazette. The paper was Republican in politics and was strong in its partisanship.
Mr. Bliss was the founder of the Bennington Historical Society and for ten years was its secretary. He was much interested in its work. He was prominent in the formation of the Bennington Battle Monument association and devoted his time freely to the furtherance of its object, the building of the battle monument.
It was largely due to his efforts that the monument was built. He visited the National Congress, the legislatures of Vermont, New Hampshire, Massachusetts; governors, members of Congress and prominent men in each state from all of which he received substantial aid and other support. His personal appeals secured the desired result. Since the consolidation of the two societies he had been interested in any move that was projected for their benefit.
Mr. Bliss was a gentleman of the old school. He was a polished writer, a pleasant and interesting conversationalist and although firm in his opinions, never tried to crowd them upon others. He was considered an authority upon the early history of this section of Vermont, and his brain was a regular store house of knowledge which he was always ready to impart. He was a great reader and had the faculty of remembering what he read. This information was always freely given, and many questions were left to him to be decided. His death is a public loss.
Mr. Bliss is survived by a brother living in Hartford, Conn., and a niece living in Middletown, Conn.
The exercises will be held Sunday afternoon at 3 o'clock at the Putnam house where Mr. Bliss has lived for 30 years. The body will be taken Monday to Connecticut for burial.
Bennington Banner
Monday, Dec. 25, 1905
The funeral of the late Charles M. Bliss will be held Sunday afternoon at the Putnam house. Rev. George S. Mills will officiate. The body will be taken to Middletown, Conn. For interment. William B. Sheldon will go with the body.
Bennington Banner
Tuesday, Dec. 26, 1905
FUNERAL OF CHARLES BLISS
Held at the Putnam House at 3 O'clock Sunday Afternoon
The funeral of Charles M. Bliss, who died suddenly last Thursday evening was held in the reception room at the Putnam house at 3 o'clock Sunday afternoon. The gathering that assembled to pay last respects to the memory of the man who had so thoroughly identified himself with the best interests of the community was largely composed of members of the Bennington Historical society and veterans of the Civil war. Rev. George S. Mills pastor of the Second Congregational church officiated and paid a high tribute to sterling worth and public spirit of the man who was generally known as the father of the Bennington battle monument. As an instance of Mr. Bliss' intense interest in the historical incidents of Bennington he cited the inauguration, due entirely to Mr. Bliss, of the observance of the birth of Wm. Lloyd Garrison and even then his final illness had come upon him and he was barely able to totter about the street.
Mr. Bliss' remains were taken Monday morning to Middlefield, Conn., for burial.
Contributed by Tom Boudreau