CAPTURED: Quartermaster L.L. Stone, formerly of Waterbury and Stowe, was taken prisoner by Mosby, on the 26th ult., near Baltimore, Va., together with his brother J.P. Stone, his cook, U. Sleeper, his blacksmith, train master, teamsters and twenty teams, on the 26th. The guerrilla chieftain rode along with about one-hundred and fifty men dressed in Federal uniforms, inquiring for Lieut. Stone. When the officer was found he was put under arrest, and Mosby, representing his command to be a squadron of the eighteenth Pennsylvania Cavalry, directed the teamsters to pack their wagons and unhitch the mules, such being the orders, as he alleged, from the headquarters. This done, the mules were easily run off and a part of the train destroyed. Lieut. Stone had a considerable amount of government funds in his possession. He is a son of Rev. L.H. Stone, Chaplain of the State Senate.----------FREE PRESS

"I was taken prisoner by the noted rebel Mosby, on the night of Oct. 26 '63, near Hargenton, Va., while on the march with the command to which I was attached, the 2d Brigade Horse Artillery Cavalry Corps. I was in charge of quite a large wagon train, directly in rear of the brigade; but, as some of my horses were contrary, I was detained, and consequently got some distance behind. Mosby, with 70 picked men, had been secreted all the evening in the woods near the road, waiting for just such an opportunity, (a wagon train with no guard,) consequently they quickly improved it, and in a very few minutes I found myself really a prisoner of war, and in the hands of that awful Mosby. We were marched nearly all night, and found ourselves next morning near Thoroughfare Gap, Va. Where we bivouacked 'till nearly noon, and then were started for Gen. J. B. Stewart' headquarters, where we arrived the next night. This was the last of our being under Mosby's charge: and I may her say, that the treatment of Mosby and his officers was quite as good as might be expected. Man of his men were heartless, rough creatures, and robbed us of blankets, watches and money.- I escaped, personally with the loss of nothing but "greenbacks". Mosby was quite gentlemanly in his appearance, and treated me with the respect due from one officer to another- Gen. Stewart sent us on the same night to Culpepper Court House, where my bother and I were allowed a room by ourselves, and the cold hard floor for a bed. Next day we started for Richmond, where we arrived at 7 o'clock, P.M. after being divested of what few greenbacks they could find about my person, I was soon conducted to the real "Hotel De Libby." But as good fortune would have it, neither Mosby's men nor the officers at Libby, got all my money.

I had some secreted about my person- and this I look upon as being one of those things that saved my life, because with money we could procure certain kinds of eatables.

I had not been accustomed to the life of a pedestrian, and the marching, with our sumptuous bills of fare, was more than I could endure, and I was soon obliged to change my quarters, and go to the hospital, where I remained nearly 2 months, when I again joined my comrades in Libby, and remained until 7th of May following, when we were warned to be ready to march in one hour. We were then marched through the principal streets of Richmond, causing as much excitement among the citizens and colored population as did President Johnson, the past summer, while "swinging around the circle." Many of them sneered and hissed at us, while others evinced kindly feelings and smiles of pity. WE crossed the James River, and were forced into miserable, filthy cattle cars, and billed to Danville, Va. a distance of 140 miles, which took us about 24 hours. I will say a word here for our prison-keepers at Libby.

Major Turner was the officer in charge. Dick Turner, whose name is familiar, was his cousin and accomplice in all acts of ill-treatment. I will only say that Turner seemed perfectly ignorant of the words, "kind" and "gentlemanly." In fact we doubled if he even knew their meaning. His prison orders were very severe, harsh and uncalled for. His instructions to the sentinels were to fire on any Yankee who might be standing or looking out of the window. Of course the same order was published to us, and we took pretty good care, although several officers were fired upon, and one poor fellow killed instantly. We felt then that could we take the life of either of these men, it would not be a sin in the sight of God.

At Danville we remained but a short time. Our treatment here was a little better. From there we were sent to Augusta, and from there to Macon, GA. Here we were put into an enclosure of from 3 to 5 acres, with nothing to protect us from the storm and hot sun, which at that season was quite oppressive. We seemed to ourselves but little better than the brutes. Our hopes of exchange and getting home seemed less and less, as we were getting farther away. We finally remonstrated at our treatment, and signed a petition as United States officers, demanding better treatment, and something for protection. Whereupon, after, a few days boards were brought in, and we were allowed to construct roofs. We remained here 'till about the first of August, when, as General Sherman was continually but slowly approaching Atlanta, they felt that we were insecure, and we were sent to Charleston, S. C. and ordered to be kept under fire of Gen. Foster's guns, who was then bombarding Charleston -At first, as those 300 shells came screaming over our heads, full of Yankee dash and vigor, we were not a little alarmed; but as time passed on., and no one was injured, we thought there was a providence in it and that Yankee shells were not intended to harm Yankee prisoners of war. And, strange to say, that during our captivity in that place, from August to October 7th, under fire every day, not one of the 1400 prisoners were harmed. As I now think of the many narrow escapes we had from those fearful shells, I am more and more impressed with the thought of our protection by an overruling Providence. I recollect distinctly that one day a shell came into the room where we were coming within a few feet of me, and much nearer some others; and many such instances I could relate. We were first confined in the city jail at Charleston, among all the robbers and murderers of the city; but afterwards occupied a building called Roper's Hospital- the most respectable and comfortable quarters we have received. I will here say that in Charleston we were more kindly treated than at any other place: the officers in charge seemed to possess more of the qualities of gentlemen, and in some instances manifested real kindness: in a few instances they came into our apartments and engaged in quiet conversation, many of them having the most foreign idea of the habits and feelings of the northern people. During the hottest time of the rebellion there was a Union League in Charleston, which did much at one time and another for the prisoners.

In September the yellow fever became epidemic, and in October we were removed to Columbia, S. C., and turned out to pasture again, the same as in Macon, except that there was not stockade around us. the guards being place at intervals of ten paces. The officers in charge there, I think, would have bettered our condition, had it been in their power. But the authorities at Richmond, with Jeff. Davis as their leader, did not care to better the condition of the Yankees. Several were shot in this place: some by trying to escape, and others by the imprudence of the guards. This was my last place of bondage. I was paroled from Camp Sorghum (as we call it) and arrived in Washington Dec. 17, '64, having been a prisoner a little less than 14 months."

Quoted in R. A. Savage Memorial to the Soldier of Stowe, 1867, commissioned by the Town of Stowe at town meeting. 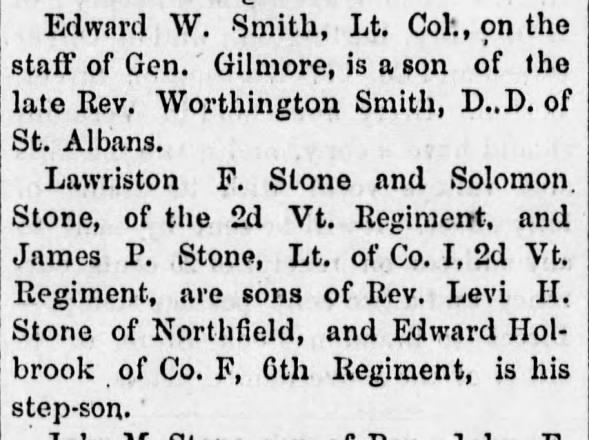