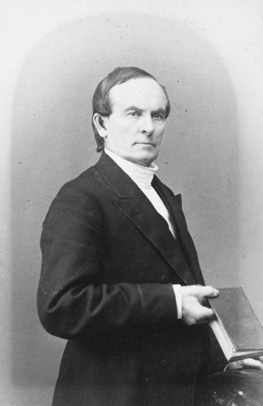 Reminiscences Of The 1st Regt. Vt. Vols., By The Chaplain, Rev. Levi H. Stone.
The sentiment contained in the following stanzas from "Miles O'Reilly" are a fitting preface to the services of this hour, and if felt by us will aid in rendering the occasion fruitful of good, now and hereafter:

"Comrades known in marches many
Comrades tried in dangers many,
Comrades bound by memories many,
Brothers let us ever be.

Brothers of the heart are we.

Brothers of one church are we.

Brothers of the Flag are we.

"Comrades known by faith the dearest
o Tried when death was near and nearest
Bound we are by ties the dearest,
Brothers evermore to be.

"And if spared and growing older,
Shoulder still in line with shoulder
And with hearts no throb the colder
Brothers ever we will be."

No day of the year, the Sabbath excepted, is more deserving of special, thoughtful, and tender notice than our decoration day.
Periods of our country's history will most naturally come before the thinking patriotic mind. The old thirteen will appear on the canvas protesting and remonstrating against the severe and cruel edicts of the Mother Country, to be answered by demands still more inhuman, till further submission seemed not a virtue, but weakness and a vice. Hence our young Congress after patient consideration of such a movement, and the results that might, and probably would follow, on July the 4th, 1776, adopted that most wonderful paper: The Declaration of American Independence, a document, which for clearness and compactness of statement and fullness and conclusiveness of argument, is not excelled by any state paper in the archives of this or any other nation.
Then of course, followed the revolutionary seven years war, for these upstart and disloyal colonies must be subdued. But what force can be brought against the British lion?
Our government then, was imperfectly organized, with but little power at home, and no credit abroad. Our military composed of farmers fresh from the field and the plough, the mechanic from the shop, and the merchant from the store. Can these compete with the trained armies of England - on the sea and on the land - a military well drilled, well fed and gorgeously clad, and the wealth of the world behind? Against this mighty host our fathers were to contend. Aye more, and against the hired tomahawks and scalping knives of the Indians. But such were the principles of these fathers of the Revolution, such their love of learning, liberty and religion, to be obtained if need be, at sacrifice of property, ease and life, that with them God ordained the defeat of England and the birth and growth of our country; and from its start, after the war though poor, yet we have grown from Washington's administration, through all political changes, from federal to democrat and from democrat to whig, from whig to republican and now democrat again, so that instead of the original thirteen states with three millions of people, we are now a nation of thirty-eight states with a population of sixty millions and territory almost without measure, states and. territories rich in soil, forests and minerals grading from lead and iron to silver and gold, absolutely an over abundance in each and all. iJut an echo from the south. Deluded men have fired on Sumter. The old flag has fallen. Rebels seem to have triumphed.
The news to the nation is like the shock of an earthquake. Are we going to pieces? Is the history of a free government coming to be admired and imitated by other countries, about to be blotted from the records of the world? No, God has not so ordered. To preserve our country intact, is the sworn duty of the president, hence Abraham Lincoln calls upon the loyal states for aid, for this is an instance where force is to be arrayed against force. Preaching and praying though good and wise, are not the means to be used exclusively in replacing the iron band which should hug the revolting states to their places. How promptly the states responded to the president's call, history has informed you. If any country in any age has shown more of self sacrifice than was shown here, we know not when nor where itxwas. Really men seemed to count not their ease and lives that our united country might be perpetuated. Wearying marches, hunger and death, more or less, were to be expected, but who should be the victim could not beforehand be known. Pope's idea was a stimulating shield. He says:

"Heaven from all creatures holds the book of fate
All but the page prescribed their present state.

From'brutes what men, from men what spirits know,
Or who could suffer being here below?
The lamb thy riot dooms to bleed today,
Had he thy reason, would he skip and play?
Pleased to the last he crops the flowery food,
And licks the hand just raised to shed his blood.
O blindness to the future thus kindly given,
That each may fill the circle marked by Heaven."

Rutland Daily Herald, Jan. 25, 1892:
Castleton - Rev. Levi H. Stone died in this village Sunday morning after an illness extending from last Monday, when he attended to his usual home duties. He was the second of a family of 10 children, and was born in Cabot December 10, 1806. Of the seven sons four were Congregational clergyman in Vermont. Of the 10 children four of them survive Mr. Stone. His father, Col. John Stone, a farmer, was unable to give his children the educational advantages that he desired, and Mr. Stone never had school advantages, his education being got entirely by home study and in the district schools. He was for several years in his younger days teacher of district schools and also singing schools. He early took up the temperance cause, and even before he was 21 years old spoke upon the subject. After he came here to live he was for some time agent of the Vermont State Temperance society. In 1831 he experienced religion in his native town and united with the church there. In 1836 he was ordained as its pastor, remaining as such nine years. He was afterward pastor of the Congregational church in Glover 10 years, in Waitsfield one year, Northfield eight years, his last pastorate being in Pawlet, where he was settled five years. He had lived in this village 21 years. In 1849 the honorary degree of A.M. was conferred upon him by Middlebury college. Mr. Stone went out as chaplain of the 1st Vermont regiment, and about a year ago was granted a pension. His seven sons and two daughters survive him. The funeral will be held at the Congregational church Wednesday afternoon at 2 o'clock. C.F. Stone of Laconia, N.H., arrived here at an early hour Sunday morning, about 10 minutes after his father died.
Contributed by Jen Snoots.