The funeral of the late Luther L. Penniman, the customs official whose remains were brought here from Quebec, was held yesterday afternoon from the residence of James W. Edwards, 31 Orchard Terrace and was quite largely attended by friends, relatives and associates in the service. The service was conducted by the Rev. Edward Hungerford and appropriate hymns were sung by Franklin Riker. The bearers were selected from former business associates and neighbors in Winooski and this city, and employees of the customs service. They were Ormand Cole of Winooski, Dr. G. F. Storrs, James Mitchell, Solomon Story, Eugene A. Smalley and Gen. T. S. Peck. The casket was covered with a profusion of beautiful flowers, including many set pieces. Burial was made in Green Mount cemetery and the arrangements were in charge of John A. Corbin. Among those from out of town who attended the service was George K. Platt, customs inspector at St. Albans.

A life-long servant of the United States government died with slight warning at Quebec on May 21st. Mr. Penniman had not been in good health for a month, but no serious condition was suspected. For change and rest, Mr. Penniman spent three weeks with his son at Waterbury, Conn., where his health improved materially. He returned to Quebec May 30, and early in the morning of May 31, expired suddenly from a heart attack. 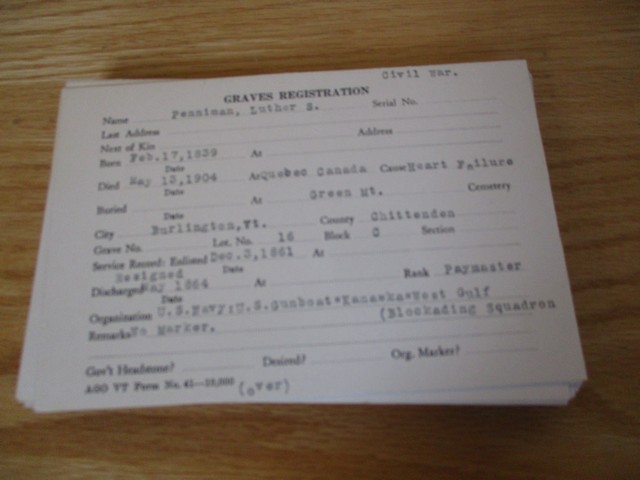