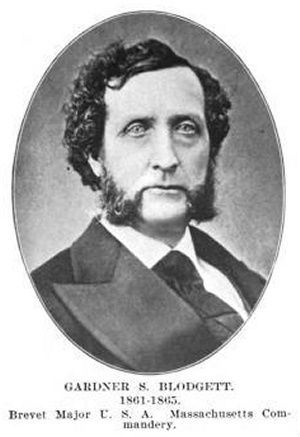 Major Gardner S. Blodgett died at his home on Winooski avenue this morning after an illness of but a few days with pneumonia in his 90th year. He had been in excellent health this winter and appeared on the street daily up to his last sickness. He received the congratulations of many friends and neighbors upon his last birthday in November and for a man of his advanced years was remarkably vigorous, physically and mentally.

The ancestry of the Blodgett family is traced back to Samuel Blodgett of Salisbury, Conn., who was a French Huguenot. The family had its origins in Brittany when the name was spelled Blojed. Rev. Luther P. Blodgett, father of the Major, was a native of Cornwall, was graduated at Middlebury college in August, 1804, and died in Cooperstown, N. Y., January 26, 1862.

Major Gardner S. Blodgett was born in Rochester Nov. 10, 1819, was educated in the district schools and Jericho Academy and began his business life as clerk in a country store, later serving for three years as clerk in a New York wholesale store. He then, in 1852, returned to Vermont and was appointed mail agent on the Burlington and Boston run. In 1854, the year in which he invented his famous portable oven, he organized the firm of G. S. Blodgett & Co., now the G. S. Blodgett Co. The oven had been used by the government for many years for army use both in camp and field.

Major Blodgett entered the Union army at the outbreak of the Civil War, was commissioned captain by President Lincoln August 3,1861, and served until October, 1865,leaving the service as brevet major.

He filled the twofold position of assistant quartermaster and assistant commissary of subsistence, and on him devolved the arduous duty of feeding and equipping the command, this too, in face of what appeared to be insuperable obstacles. Major Blodgett was ordered in May, 1862, to Annapolis, Maryland, under assignment to duty as chief depot quartermaster, having charge of this important post the remainder of the year. The great parole camp accommodating 15, 000 men was built under his direction. In 1864 he was ordered to Baltimore to relieve Col. Alexander Bliss as chief quartermaster of the eighth army corps under command of Gen. Lew Wallace, and conducted both this and his work at Annapolis. Major Blodgett disbursed nearly two million dollars in cash, issued 150,000 uniforms, 50,000 tents, 300,000 blankets and immense quantities of camp and garrison equipments, together with nine million pounds of grain and forage, 2,000,000 tons of coal, and a great quantity of lumber.

While stationed at Annapolis, Major Blodgett laid out the national cemetery, selecting the site, purchasing the ground and later interring therein 3000 soldiers. He also attended to the manufacture of coffins, and superintended the erection of a small-pox hospital.

At the close of the war Major Blodgett was ordered to Washington to succeed Colonel Bliss in charge of railroad and river transportation. He resigned in October, 1865, to return to his home.

In 1873 he was again called into service of the government for a brief period as assistant United States commissioner to the Vienna exposition.

Major Blodgett was a valued member of the First church, charter member and treasurer of the Military Order of Loyal Legion, member of the Sons of the American Revolution, Society of the Army of the Potomac and of Stannard Post,. G. A. R.