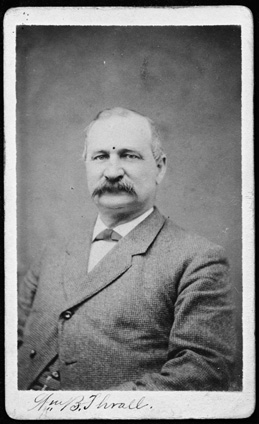 William B. Thrall died after a lingering illness at his home, No. 29 Woodstock avenue, at 9.50 o'clock last evening.

Mr. Thrall was born in Rutland in February, 1834. He was the son of Reuben Thrall, a prominent lawyer here before the war. He spent his early life in this city, and for several years was a printer on the HERALD. He served in the civil war, and had since been a member of Roberts post, Grand Army of the Republic. After the war Mr. Thrall was for many years an engineer on the Central Vermont railroad. In November, 1855, he married Frances C. Durfey of Westport, N.Y., who died in March 1894. He married Mary A. Mooney of Castleton in August 1896.

Mr. Thrall was mainly instrumental in having the streets of this city lighted with electricity. During the latter part of his life he was for five years transfer mail agent at the Rutland depot, but was obliged to resign on account of poor health. He afterwards worked as a bookkeeper in the office of the Rutland Street Railway company. He was a member of Killington commandery, Knights Templar, and had always been a democrat.

Mr. Thrall had a remarkably good memory and he had a notable fund of anecdote and reminiscence about Rutland and Rutland people which made him an entertaining conversationalist. He was of great service to the HERALD, particularly in 1894 when its centennial edition was being prepared. His ability to recall scenes and incidents and the sayings of people who had passed away materially added to the value and interest of that memorial number of the paper.

Besides his wife Mr. Thrall is survived by two sons, William W. and Jesse G. Thrall; a brother, George Thrall, and a sister, Mrs. E.H. Randall, none of whom reside in this city.