In the hospital at Chicago, of dipthheria, Dec. 12th, David K. Titus, aged 21 years and 8 months.

The subject of this notice was brother to Rev. E. R. Titus, of the Vermont Conference.He experienced religion in the 14th year of his age, and lived in the enjoyment of the same about 2 years; but like so many others, by neglect of duty, lost his enjoyment and hope. He was united in marriage to Miss Elmiria M. Cummings, Nov. 26, 1861, and they were living happily together, when the writer became acquainted with them last May.. In the month of June he enlisted in the 9th regiment of Vermont volunteers, and went into camp at Brattleboro. Before leaving home, he resolved, like the prudent man, who foreseeth the evil and hideth himself, he would return to God and seek the salvation of his soul.He gave good evidence that God had healed his backslidings. He went with the regiment when it left the state, and continued with it, sharing its trials and sufferings until about one week before his death. A short time before he died, he requested that someone might come and talk and pray with him, but the nurse knew no one there. He then requested that a fellow soldier read to him from the Bible, which he did. He also requested him to tell his beloved Elmira, to trust in the Savior, and his dear mother, that he died praising God. His body, at his request, was sent to his home, and his funeral servces attended on the 18th of December last. May God Bless and sustain the bereaved widow, parents and friends. Wolcott, Jan. 25. 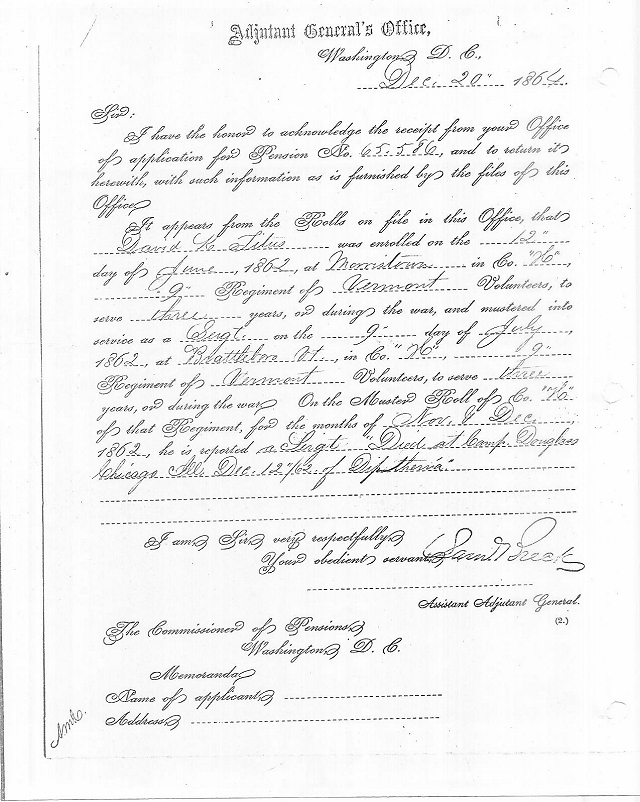