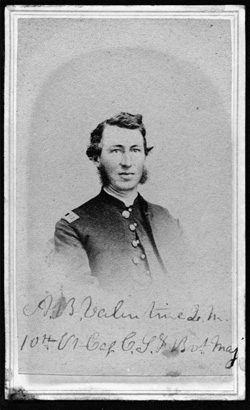 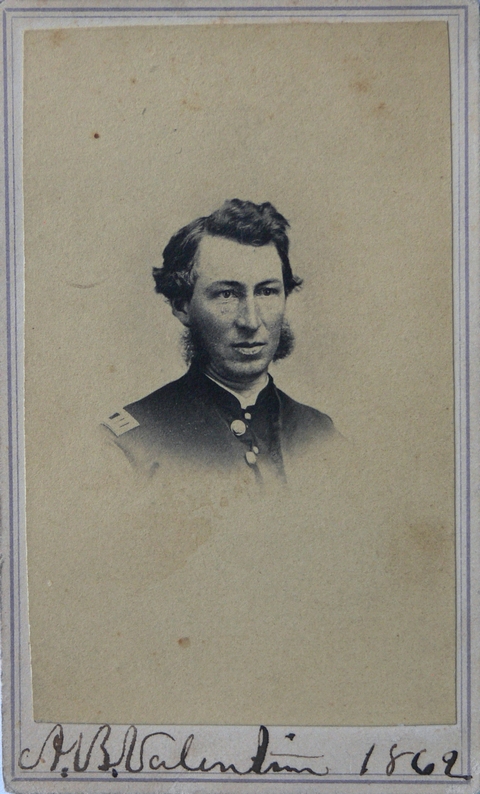 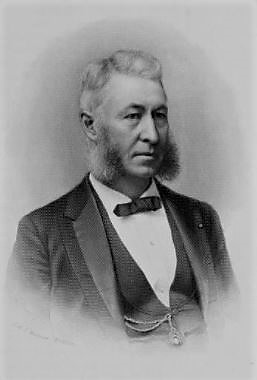 Valentine, A. B., of Bennington, son of Joel and Judith (Wells) Valentine, was born in Bennington, April 1, 1830. He is descended from Richard Valentine, who was one of the original proprietors of Hempstead, L. I., where he settled in 1647.

The educational training of Mr. Valentine was received in the Bennington common schools, Union Academy and at Suffield, Conn. When he had arrived at man's estate he commenced business with his father under the firm name of Joel Valentine & Son, but later attracted by the gold fields of California, he emigrated, in 1852, to the Pacific coast where for two years he was engaged in mining and trade. Then he returned to Bennington where he established a grist-mill in the building formerly occupied by his father.

In 1856 he was united to Alma L., daughter of Luther W. and Cynthia (Pratt) Park-Five children are issue of this marriage: May (Mrs. A. B. Perkins of Bennington, deceased), Park (deceased), Jennie A., Wells V., and Lillian.

On leaving the service of his country Major Valentine returned to his native town where he purchased his father's property and converted it into a knitting mill. This enterprise met with success and though the mill was destroyed by fire, it was soon rebuilt, and the business reorganized and incorporated under the name of the Valentine Knitting Co.

He was actively engaged in the establishment of the graded schools in Bennington village and in the erection of the fine school building of which Bennington is so justly proud. He took a prominent part in the celebration of the centennial anniversary of the battle of Bennington, being chief marshal on that occasion, and was actively interested in the Bennington Battle Monument Association and in the construction of the monument itself. It was largely through his efforts that the Soldiers' Home was established in Bennington, and in G.A.R. circles he is well known, having been department commander of that organization for two years (in 1882 and 1883).

Though politics as such possessed no great temptation for Major Valentine, in 1886 he was prevailed upon to represent his county as one its state senators. In the session of that year he was identified with many important measures in connection with the Soldiers' Home and the amendment of the laws relating to the National Guard of Vermont, which latter legislation resulted in great benefit to that body. As he had been especially active in educational legislation, he was appointed by Governor Ormsbee one of the committee of three to select text books to be used in the schools of the state and to contract for the purchase of the same. Subsequently he was selected by Governor Dillingham to fill the position of commissioner of agriculture and manufacturing interests of the state. Major Valentine was a member of the Republican national convention in 1884, was one of the original incorporators and directors of the Bennington County Savings Bank and is now president of that institution. He was for many years president of the board of trustees of the Bennington graded schools, and was a charter member of the Vermont Commandery of the Loyal Legion. He is now (1894) president of the Vermont Officers Reunion Society. His knit goods manufactory is the largest in the state, and its reputation is second to none in the country.

In his religious belief he is an agnostic, though he attends and supports the Congregational church, contributing liberally to religious and charitable enterprises. Major Valentine has traveled much, is liberal in his ideas, proud of his village, and above all things desirous of its prosperity, being ever ready to unite with his neighbors in adding his influence to any scheme which tends to the improvement of his native town.

For Over Forty Years Had Been
a Prominent Factor in
Bennington.
__

In the death of Major Alonzo H. Valentine which occurred from heart disease at his home on Pleasant street about 7:30 Saturday evening Bennington loses a citizen so long identified with the business prosperity of the town, so long a factor in the public interests of the municipality, and so well and favorably known by everybody that the sense of loss is brought home by his death as it would be with the passing of but few in any community.

Major Valentine was a strong man, a kind friend, a vigorous fighter and a virility of both body and mind that would have brought him to the front anywhere. He was a son of Joel Valentine, who started in the knitting business her a little more than 100 years ago, and was one of the founders of this great source of the towns growth and progress. Major Valentine was 74 years of age, always lived here and for years was prominently identified with the best interests of the town. For over forty years he was engaged in the knit goods business, a large part of the time president of the Valentine company which he organized.

When the tenth Vermont regiment was raised he was appointed quartermaster and went to the front. Afterward he was appointed commissary of volunteers with the rank of captain and later was brevetted major and served during the war. He was a zealous member of the G.A.R. and department commander two years during which time the department reached its high water mark.

He served as county senator 2 years, was ten years a trustee of the graded school district of which he was one of the founders. He was chairman of the building committee for the new schoolhouse. He was a member of the House Market Club and for several years a director.

He had large interests in Montana and widely known. He was a thorough Vermonter and his services in the promotion of the states material interests have been widely recognized.

As state immigration commissioner Major Valentine had a prominent part in a systematic attempt to repeople the abandoned farms of Vermont – a work which the state legislature foolishly allowed to lapse even though the work done bore abundant fruits.

Major Valentine leaves a wife and two daughters, Mrs. Cassius R. Peck of Burlington and Miss Jennie A. Valentine of this village. The funeral was held this afternoon.