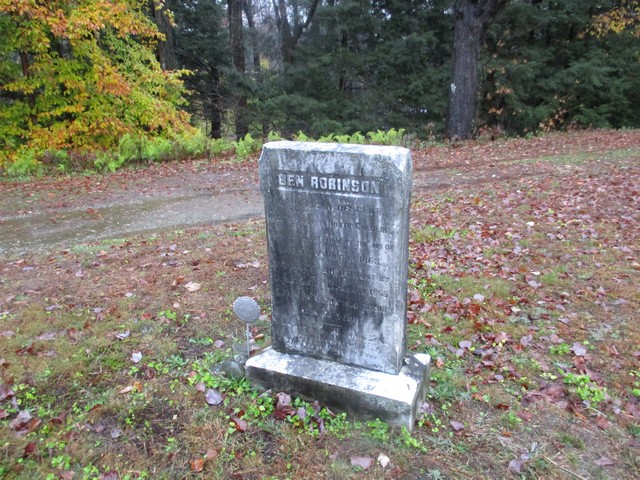 
Death of Ben Robinson, once a Slave.

An unusual and most interesting life history was ended when Ben Robinson, aged 57, breathed his last at midnight Tuesday at Mrs. L.B. Flint's on Park street where he had been boarding for some time past.

Ben was born in North Carolina a slave and when he was hardly more than three years old his mother was sold away from him and sent down the river to New Orleans. Later he himself was sold to a neighboring planter by the name of James Furbey and as he was being taken along the road to his new home he saw his father working in one of the old master's fields, and he wanted to go and speak to him but even this poor consolation was refused to the child.

One day when he was ten years old he was cultivating a cornfield with a mule at Newbern, S.C., as Company C, 9th Vermont regiment, went marching by and the Northern soldiers called to the lad to join them. He couldn't he said, without asking "massa," but Company C felt perfectly able to cope with "massa" and so convinced him that he left the mule and cultivator in the field and committed himself to the protection of his new friends.

The first year of his army life he remained with Company C, one of whose members was John Manney, then of Middlebury. The next year Ben came into the service of Lieut. William Holman of Company G, 9th Vermont, who found the colored boy so faithful and willing that he brought him home to Braintree at the end of the war.

The lieutenant assumed guardianship of Ben, sent him to school with the white boys and when he was 21 gave him $200 to begin life for himself. This money Ben unfortunately lost through misplaced confidence in the man to whom he loaned it, but as he was sober and industrious he became more than self-supporting and had a comfortable sum on deposit at his decease. He worked on farms at first but for many years had been night watchman for the mills. He was employed in that capacity by the E.F. Emerson company, when in February the heart disease which caused his death compelled him to stop work.

The soldiers had always a great interest in him and he was sincerely attached to them as his deliverers from bondage. Thirty years after the war John Manney came from Middlebury to live in Randolph and Ben recognized him by his voice as a member of the Company C, which took him out of North Carolina. Only a few day before he died he spoke of those days and wondered if the old mule was still standing in the cornfield.

Boy and man, Ben was contented and happy in his Northern home and had been heard to say that he didn't believe there was another place in the world where, in spite of his dark skin, he would have been treated so white. And he deserved the treatment he received, for he was a good citizen, honest, quiet, well meaning and worthy of respect. He served his country loyally though in a humble way and the old soldiers gave him friendship accorded to a comrade. In 1892 he went to Washington with the veterans at the time of a National encampment to try and find some trace of his father, whom he hoped might still be living but learned instead that the only parent he remembered had long been dead. His surname, after the fashion of slaves, he took from his master and was first called Ben Furbey but afterward added the name of an earlier master, Robinson, by which he preferred to be known.

He had often expressed a wish to be buried by the Grand Army and his funeral in the Methodist church at 2 o'clock this afternoon was held with the honors of U.S. Grant post, No.96. It was hoped that A.C. Holman, son of Lieutenant Holman, might be present from Boston to serve as one of the bearers, who in his absence were Comrade John Manney and three of Ben's schoolmates, E.S. Abbott, Allen Flint, Jr., and Henry Seymour."

Benjamin Robinson of Randolph, colored, about 58 years old, died Wednesday, the result of a long period of ill health, "Ben", when about 10 years old joined the ranks of the 9th Vermont regiment while they were marching through Wilmington, N.C. in 1862 and was in the same company with John Manney of Randolph for two years.
He was first servant to Captain Livingstone of Montpelier, and later attended Lieut. William Holman of Randolph, who at the expiration of his term of army service took the negro boy home and gave him the advantages of a district school education, and when of age, gave him $200 and sent him out to earn his living. He had long been employed in the E.F. Emerson mill and had acquired quite a little property by his economy. "Ben" was buried from the Methodist church Thursday, Rev. Fraser Metzger officiating, and the members of the Grand Army post attended in a body.