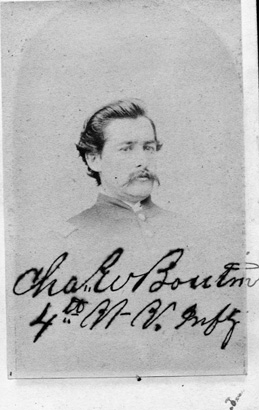 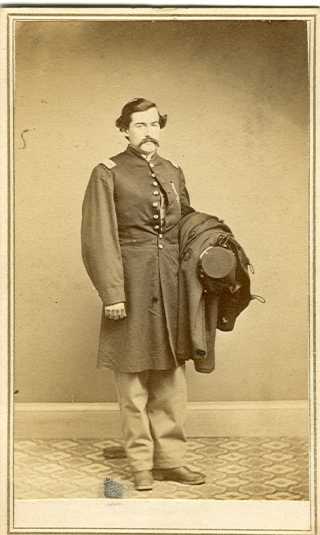 Removing at an early age to Windham he received such an education as the district schools of the town afforded and followed the occupation of a farmer until 1858. He then followed carpentering in Andover and Chester until 1865, when he engaged in the dry goods business in Chicago. This venture was of short duration, for in December of the same year the entire building and stock were destroyed by fire and he was left without a dollar. Not daunted, however, he started out and accepted such employment as he could find, locating at Webster City, Iowa, in 1867, where he engaged in the nursery business, but this proving uncongenial he sold his interest and removed to Hampton, where began his life's business–that of an architect and builder, in which profession he stands high.

In 1861 he enlisted as corporal of Co. E, 1st. Vt. Regt., and in the following May went out with the regiment; again enlisting August 20, in the 4th Vt. Regt., he was successively promoted 1st lieutenant, captain and major. Major Boutin was on duty with his regiment and participated in all its battles until June 28, 1864, when with others of his regiment he was captured by the rebels and held as a prisoner of war until March, 1865, being confined at Libby, Macon, Savannah, Charleston and Columbia. After being exchanged he rejoined his regiment and was mustered out of service with it in 1865. He took a prominent part in the organization of the Iowa National Guards and for sixteen years has served as captain, major, lieutenant-colonel and colonel of one of the crack regiments of the state.

A staunch Republican, he has never evinced a desire for public office. He has, however, been a member of the city council, and county auditor of Franklin county, Iowa, for two terms; and twice refused the nomination for the mayoralty of Hampton.

He has taken a deep interest in matters Masonic and has held nearly every office in the gift of the lodge and chapter; as a Royal Arch Mason and Knight Templar he has knelt at the altar of the Mystic Shrine. Assisting in the organization of the local post G.A.R., he has been adjutant, past commander, delegate to department encampment many times and a national delegate twice. Became a member of Wisconsin Commandery, Loyal Legion, and assisted in organizing the Iowa Commandery of which he is now a member.

DES MOINES, Iowa. Jan. 4. Major C. W. Boutin, for several years custodian of the state house, died here today aged 72 years. Major Boutin, who served in the Fourth Vermont infantry during the Civil war, was many times promoted and was mustered out as a major of his regiment at the close of the war.