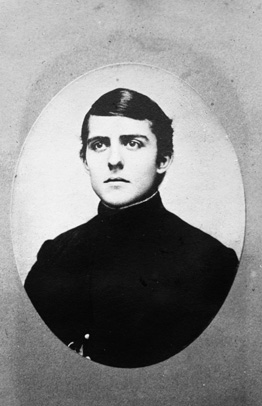 Son of William L. and Adelia (Strong) Yale, was born in Charlotte, Vt., October 28, 1840. Educated in the Academies at Williston, Vt., and Watertown, N. Y. Enlisted from Williston, Vt., under the call of August, 4, 1862, by the president and the governor's order Number 13, of August 13, 1862. By direction of the selectmen acting as recruiting officers the volunteers from the several towns assembled at Richmond, Vt., September 10, 1862, and after the meeting had been officially organized proceeded to the election of officers. The Rev. Joseph Sargent, a volunteer from Williston, nominated John L. Yale for the office of captain and he was unanimously elected captain of the Richmond Company. After the election of the two lieutenants Captain Yale called the company to order and after appropriate remarks, informed the company that they were in the state service, under pay and would be furnished with board and lodging at Ransom's hotel and furloughed until Monday morning next. The company assembled as ordered and commenced drilling. The company passed the medical examination by Dr. Knox fairly well. The line officers met at Montpelier, Vt., September 24, and elected Field Officers and the company was thereafter Company P, 13th Vt. Vol. Inf., and left for Camp Lincoln, Brattleboro, Vt., September 29, 1862. During our stay at Camp Lincoln the company passed the second examination by a United States surgeon without any rejections. The many interesting incidents that took place here and during the regiment's passage to Washington will be told by others. While on Capitol Hill, death made its first entry into our ranks. At the regiment's first dress parade in Virginia at Camp Seward the company boys were pleased to see Colonel Rolla Gleason, of Richmond, Vt. The company received Its first lesson in picket duty of four day's time from eve of November first, 1862. The description of Camp Vermont and many incidents connected therewith will appear in the many personal sketches. At Union Mills the Company did duty at brigade headquarters, where some of the members received their first lesson working on a railroad. On the 12th of December the company left their log huts at Camp Vermont and camped in a pine grove near Fairfax Court House where it remained until January 20, 1863. The company was with the regiment in all of its actions while at Camp Fairfax. Two men died while in camp here. On account of continued illness. Captain Yale resigned, which was accepted February 6, 1863, and taken home to Vermont by his father, who had taken care of him from the time of being taken sick. In July, 1864 commenced to recruit for Company K, 17th Vt. Inf; commissioned captain September 22, 1864. Mustered in October 8, 1864; mustered out of the service July 14, 1865. Married Effie J. Lewis, of Williston, Vt., April 1, 1865. Five children have been born to them. Has been in the lumber business a large portion of the time in Burlington, Vermont. Now resides at Bedford, Mass.

Captain John L. Yale died Monday, September 5, 1927, at the home of his son in Arlington, Massachusetts. He was in his 86TH, year.

Commissioned Captain, September 10, 1862, of Company F, 13TH. Regiment, Vermont Infantry, his service in the regiment was cut short by Typhoid fever in January 1863. That illness forced his resignation on February 6, 1863.

He was the son of Deacon William Yale of Williston, Vt. That Deacon learned of his son's illness, traveled to Washington D. C. but was denied access to military areas. Undaunted, Deacon Yale appealed to Secretary of War, Edwin M. Stanton, who granted a military pass for hospital access. John Yale returned to Vermont the first week in March.

Careful nursing, backed by a strong constitution, restored John Yale's health and he was commissioned September 22, 1864 as Captain of Company K, 17TH. Regiment, Vermont Infantry. Serving to the end of the was he was honorable mustered out July 14, 1865.

After the war Captain Yale resided in Burlington and was, for many years, a devoted member of the Methodist Church. Surviving him were his widow and three children, Dr. George W. Yale of Arlington, Massachusetts, Mrs. A.L.E. Crouter of Philadelphia and Mrs. Frank S. Rogers of Watertown, Massachusetts and by a sister, Miss Caroline Yale of Clark School, Northampton, Massachusetts.

Interment was in Lakeview Cemetery, Burlington, Vt. on September 9, 1927.