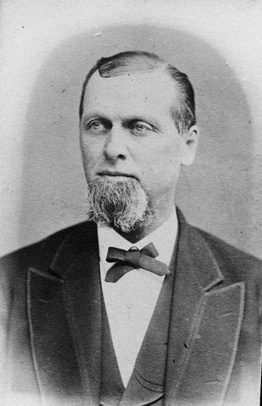 HON. JABEZ DELANO BRIDGMAN, was born in Grafton, June 10,1828, and was a son of Dr. B. H. Bridgman. He received an academic education, and when 20 years old entered the office of C.I. Walker and George B. Kellogg of Saxton's River, as a law student, and when one year later Walker and Kellogg dissolved partnership, he accompanied Mr. Walker to Bellows Falls, where he completed his studies, and was admitted to the bar in 1851, about that time Mr. Walker accepted a professorship in a Detroit, Mich. law school, and Mr. Bridgman purchased his library and continued his practice. A few years after he was married to Sarah, daughter of William Conant, of Bellows Falls In 1857-58 he represented the town in the Legislature, and was elected Senator in 1880.

He enlisted in the 16th Vt. Volunteers, was chosen adjutant, but served only a few months, when he resigned and returned to his law practice. He died April 7,1887. His partner, G.A. Western continues his business.

Hon. J. D. Bridgman, who was stricken with paralysis Tuesday afternoon of last week, while sitting in his office, died Thursday morning, having remained most of the time unconscious. Mr. Bridgman was the son of the late Dr. Benj. H. Bridgman of Grafton, where he was born June 10m 1828. After receiving an academic education he studied law at Saxtons River and Bellows Falls and was admitted to the bar in 1851, after which time he has been in continuous practice in the same office. Soon after his admission to the bar he married Miss Sarah E. Conant, daughter of the late Wm. E. Conant whom he leaves a widow, but no children. He had served in both branches of the legislature, representing the town in 1870-8, and was a member of the senate in 1890-1. He enlisted in the 16th Vt. Volunteers and was appointed adjutant, but after a service of a few months resigned and returned to his practice. His funeral was attended at his late residence last Saturday afternoon at two o'clock.