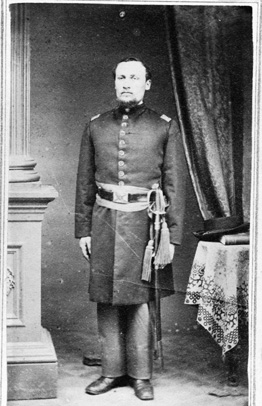 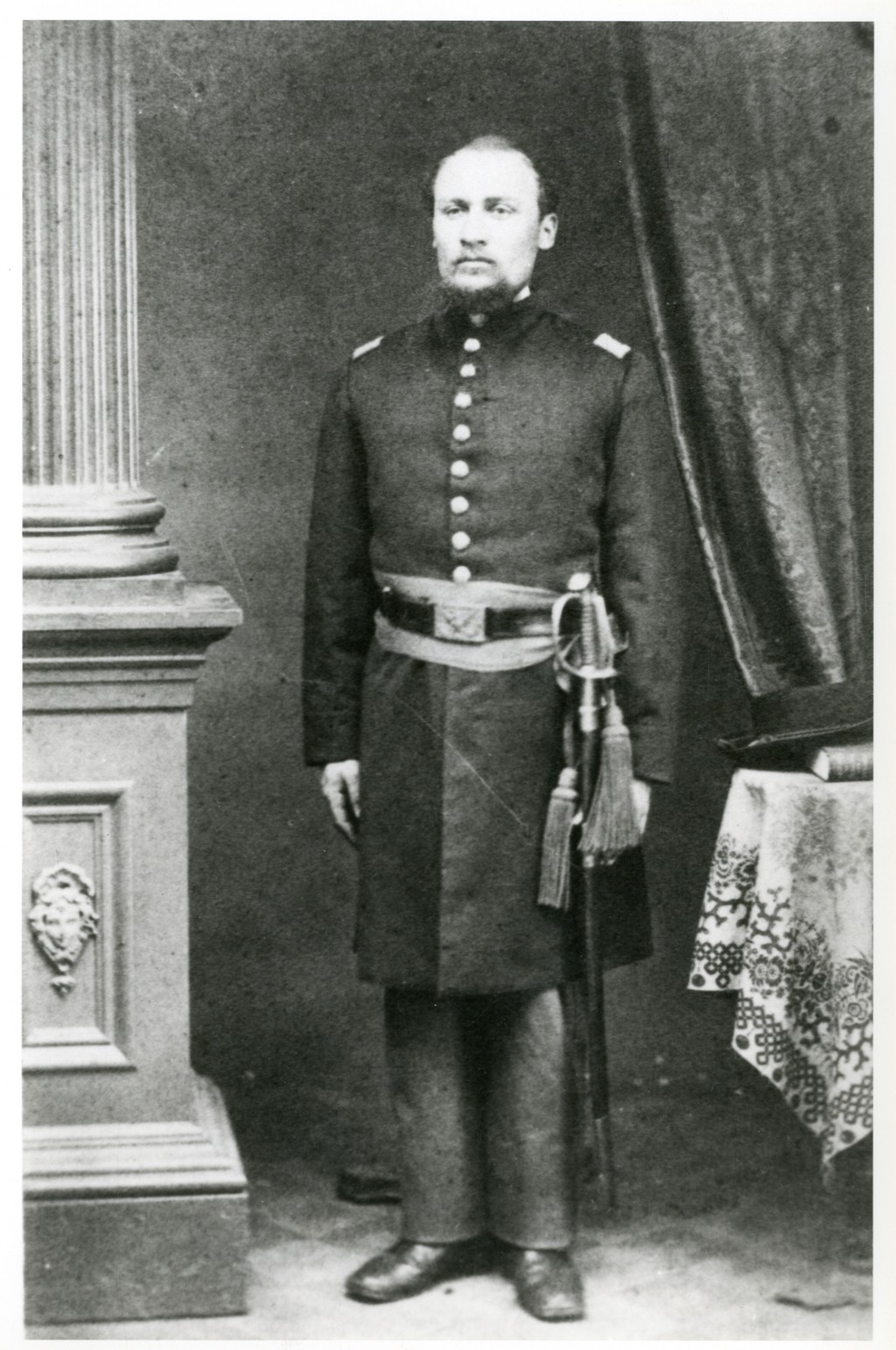 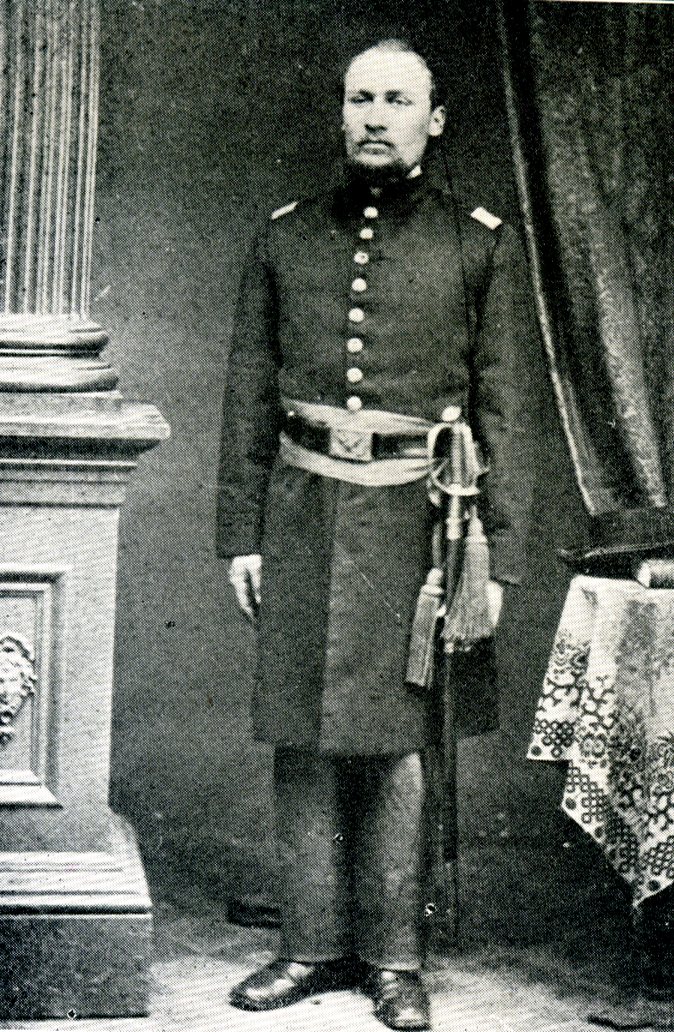 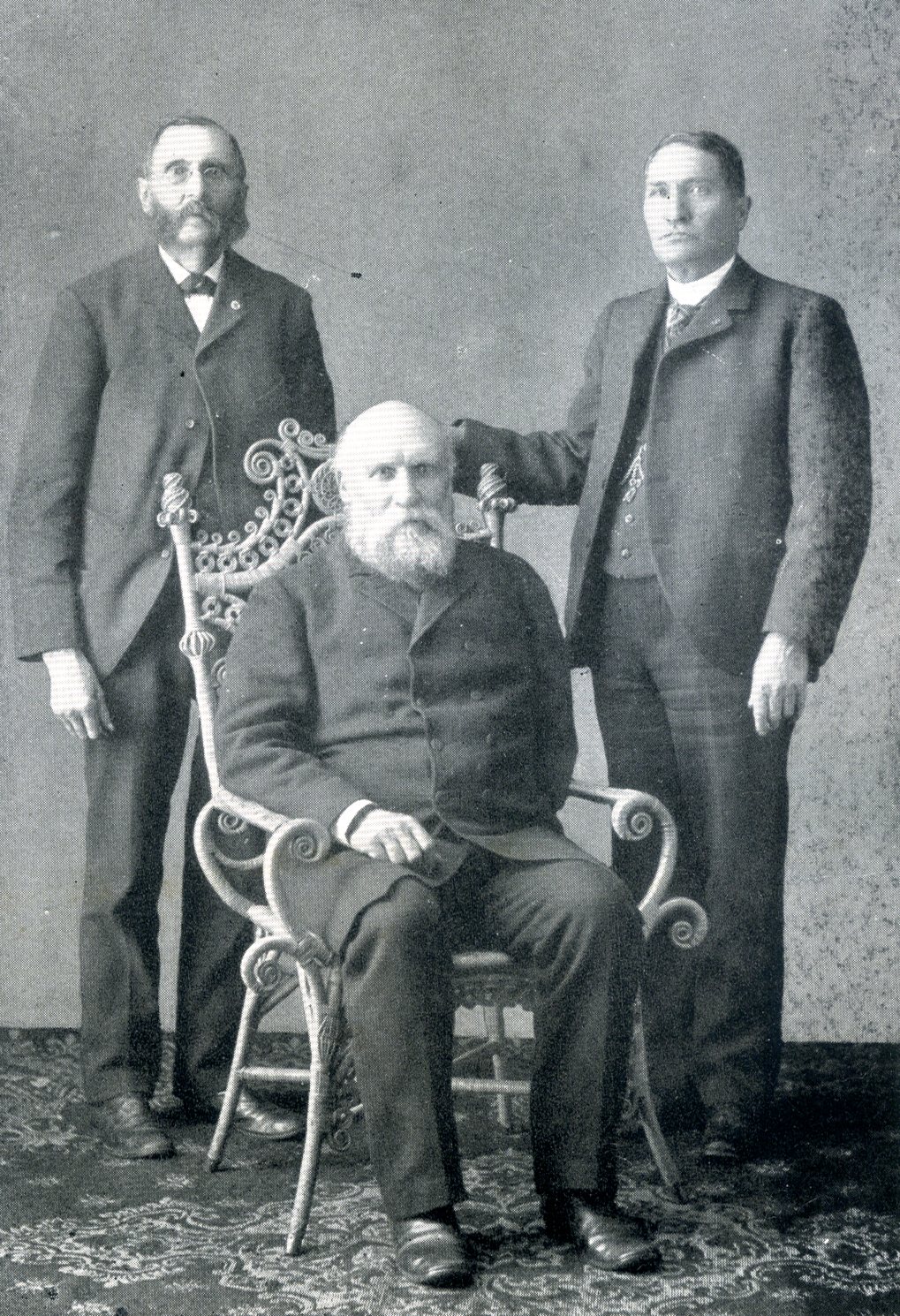 FIRST LIEUTENANT STEPHEN F. BROWN First Lieutenant Stephen F. Brown of Company K, was in many respects quite a precocious boy and young man, a brilliant scholar, applying himself at all times with zeal and determination when at school, and every leisure moment while at home on the farm, to acquire knowledge. He was a teacher at the age of sixteen years in a district school of his native town. In the fall of 1860, the writer first met him as a student at Bakersfield Academy. He was then eighteen, past, but looked and appeared much older. Was here preparing for college and ten to fifteen hours each day did he toil with Greek and Latin and other textbooks to reach the goal of his ambition. His father and mother were devoted Christians and prominent and leading members of the Methodist Church at Swanton, and therefore, Lieutenant Brown in early life was surrounded by exceptional advantages for acquisition of knowledge, moral and technical.

He was born and raised as a genuine patriot, confirmed in the belief that there was no country or land like his. Only a mere circumstance prevented him from volunteering into Company A, First Vermont Regiment under the first call made by President Lincoln for troops. He was anxious to go, and so was his father, but only one could be spared very well from the farm. His father was forty-four years of age, and his son, afterward Lieutenant Brown, nineteen, and both were anxious to join the Green Mountain Guards and go to the front, but finally agreed that one should go and the other remain to carry on the farm. The father, in order to amicably settle the question, as to which should go, proposed the old arbitrary custom of drawing cuts, and the one who drew the longest to remain at home and the shortest to go. The wife and mother like a true Spartan, said, (with an aching heart for she would not decide between husband and son), "now, the one that draws long to remain; and the one short to go." The mother prepared the sticks and held them firmly grasped and securely guarded so neither could detect one from the other, and the father drew first and won, and volunteered, and the son though sadly disappointed, cheerfully acquiesced in the result and manfully managed the farm until his father returned.

Within thirty days after his father's return home he enrolled under recruiting officer George P. Conger, of St. Albans, expecting then to serve in the First Regiment, Vermont Cavalry, but on account of an injury to the back in early life, was advised by the family physician that he was disqualified for service as a cavalryman, and therefore was not mustered in with this regiment.

The next year In August, 1862, Lieutenant Brown realizing the urgency for troops, and not satisfied to defer longer his cherished desire, and becoming seriously impressed with duty to country, again volunteered, and this time to go into the infantry branch of the service. He with Captain Blake was given authority by the selectmen of their town to raise recruits to fill the quota of the town under the call of August 4th for 300,000 volunteers. Brown and Blake volunteered at a public meeting, and was then and there supplied with recruiting papers and at once started out to raise the company, and in a few days, more than enough had enrolled to avoid a draft in their town. Brown in this as in all matters was energetic, and secured many school mates and friends of good standing to go with him. He was not one of that class usually called "a hail fellow well met," and yet always kind and generous, very friendly to every one, and would shake hands as often as he met you, and yet his appearance was reserved and therefore some were led to think that he felt above the boys of his company, which was not true, but these were first impressions and all soon discovered that Lieutenant Brown conversed and mingled freely with all, especially the more humble born and ignorant of his company.

Brown felt that he was entitled to be advanced to the captaincy of Company K, when Captain Clark was promoted to Major of the Regiment, but no one, unless some very intimate friend, ever heard a word of criticism fall from his lips concerning it.

He sincerely believed in the principle of majority rule and manfully discharged his full duty in whatever capacity assigned him. He was ever loyal, kind and condescending to his superiors in office and never manifested revenge, jealousy or ill-will toward any in his company or regiment. He entered into military life with his whole heart and gave his undivided attention to the end of rendering the best possible service to his country. He would cheerfully divide his last cent or ration of food with any of the boys of his company, and would freely stretch forth his hand at any time to assist and serve the most lowly of his comrades regardless of time and effort. At all times day or night he could be found in his place ready for duty.

The boys did not at all times take kindly to every idiosyncrasy manifested or suggested by him, and sometimes failed to accord to him the courtesy he deserved. He visited the sick in camp or at the hospital almost daily, looking after their wants and care, and with his ever present supply of quaint and funny stories endeavored to encourage and cheer. The despondent, the sick, the unfortunate, the more ignorant, and the homesick ones he sympathized with, and such were his ardent admirers. Likely no officer in the regiment would make so great a ijersonal sacrifice as he, to accommodate or do a favor, regardless of rank or title. He was always with his company and regiment, alert and anxious concerning the wants and comforts of those of his company, especially, (and sometimes at great risk of life and sacrifice of official position) as will appear in a biographical sketch of him in another part of this book.

While I personally knew he was apprehensive of death every moment in battle, yet no one showed less fear or acted more bravely. He had perfect command over himself and moved about as if no accident could befall him. It was my privilege during that great battle of Gettysburg to see but few whose appearance commanded my admiration like that of Lieutenant Brown. On this bloody field he illustrated again and again those great and noble qualities, absolutely essential in a soldier, whether an officer or a private.

His conduct as an officer of the Line in the loth Regiment was highly honorable and creditable. He was a valiant soldier and conscientiously discharged every duty. A biographical and genealogical sketch of Captain Brown will be found on page See Roster of this book, which will speak of him in civil life as well as military.

Death of Captain Brown
Capt. Stephen F. Brown, a notable veteran of the civil war, suddenly died at his home in Swanton Sept. 8 of heart disease. He was born at Swanton in1841. Capt. Brown enlisted in Co. K of the 13th Vermont regiment. At Gettysburg, he was under arrest on a charge of disobedience and his sword had been taken from him. When a counter-charge was ordered against that Picket's, Capt. Brown seized a hatchet and went into the melee with his men. With this weapon he captured a confederate officer, retaining the latter's sword and pistol as trophies. During the battle, Brown was injured in the head by an exploding shell. He lost an arm in the battle of the Wilderness. After the war, he entered Albany law school and practiced in Chicago. Of late years he had been a farmer.

Captain Stephen F. Brown
Man Who, Armed With a Hatched, Let Company K, 13th Vermont
in Battle of Gettysburg.
Captain Stephen F. Brown, 62, died of heart disease in Swanton Tuesday night of last week. He enlisted in Company K of the 13th Vermont Infantry as a private but was elected 1st Lieutenant. This regiment was part of Gen. Stannard's famous brigade at Gettysburg. At that time Capt. Brown was under arrest upon some formal charge of disobedience of orders not involving any moral culpability, and his sword had been surrendered according to military custom.. He could not be kept out of action, however, and in the counter-charge on Picket's brigade on the third day, he led his men, his only weapon being a common camp hatchet. He captured a Confederate officer, however, and retained the latter's sword and pistol as trophies. He was injured on the head from the explosion of a shell while aiding a wounded comrade. His exploit in leading his men with a hatchet is commemorated in a statue erected by the 13th Vermont on the field of Gettysburg.
After his term of enlistment had expired, he raised a company of 160 men and was elected captain of Company A, 17th Vermont Infantry. He was so badly wounded at the Battle of Gettysburg that amputation of one arm was necessary. After the war, he graduated from the Albany Law School, and for many years was a prominent lawyer in Chicago. He has been living quietly on a farm in Swanton for the past few years.