On 9 July 1870, Milo, age 24 and single, was living in Montgomery, Alabama, Ward 3. His occupation is listed as deputy sheriff. When and how he moved to Alabama has not been determined.

Milo married Elizabeth V. Mitchell, a native of Alabama, in Montgomery, on 9 September 1875. On 1 June 1880, Milo and Elizabeth, along with a brother-in-law Frank Pate and a niece Annie Holian (?), were living in Ward 4 in Montgomery. Milo's occupation was wagon maker, and Frank was a tinner.

Milo applied for a pension on 18 July 1890. Earlier that year, Congress had passed the Dependent Pension Act, which no longer required service-incurred disabilities for Civil War veterans. Less than a year later Milo passed away, and was buried in Oakwood Cemetery, Montgomery, just to the right of the GAR monument, pictured below.

On 16 June 1891, Elizabeth applied for and was granted a widow's pension. According to a city directory, she was still living at 711 Lawrence Street, her occupation listed as dressmaker. 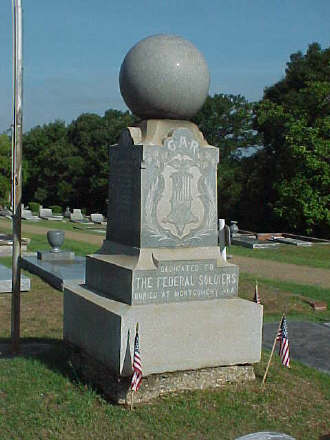