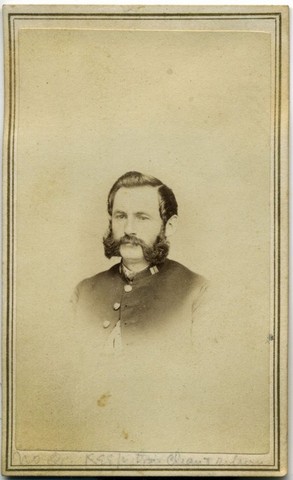 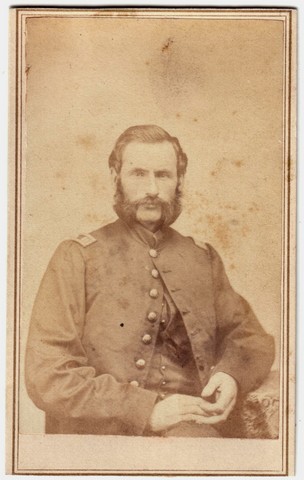 Capt. Albert Buxton Since the army of Gen. Grant crossed the Rapidan, many of the bravest and best sons of Vermont have attested their devotion to their country by yielding up their lives in its defense. A long list of names has been added to Vermont’s roll of honor. Conspicuous among them will ever stand the name of Capt. Albert Buxton, late commanding Co. H, of the 2d U. S. Sharpshooters. He was a son of Nathan and Elizabeth Buxton of Londonderry, Vt., and brother of Capt. Charles Buxton of the 11th Vt. Vols. He was born in Londonderry, Dec. 26, 1835, and was at the time of his death, May 6, 1864, twenty-eight years of age. From his boyhood up to his death, he bore an unblemished reputation, - being noted as a kind and obedient son, an affectionate brother and friend.

In 1855, he united with the Baptist church in Londonderry, and from this time to his death, he maintained the character of an earnest and consistent follower of Christ.

In August, 1863, he was united in marriage to Miss Hattie A. Rice of Walpole, N. H., an amiable and excellent lady who now mourns the loss of a kind and affectionate husband.

In January, 1864, he re-enlisted, and with him most of his company. At this time he came to Vermont, and looked upon those near and dear to him for the last time on earth.

Captain Buxton participated in fourteen battles, - among then the second battle of Manassas, South Mountain, Antietam, Fredericksburg, Chancellorsville and Gettysburg. At Antietam he was prevented from sickness from leading his men on to the field. He heard the sound of the battle, - thought of his men in the deadly strife. He determined to be with them. Not having the strength to walk, he procured a horse, and rode on to that field of carnage and death, that he might inspire his men by his presence to do, and if need be, to die in defence of their country. At Gettysburg he was slightly wounded. He fell mortally wounded in the battle of the Wilderness, May 6, and died at sunset the same day.

Capt. Buxton was characterized by coolness and bravery in battle, and by his fatherly care for, and kindness to his men. A member of his company says: - "The eyes of man never looked upon a better officer. He took good care of his men. Myself and three others, being sick, were once upon a march unable to keep up with the company. We came up late. It was night. It was raining. Capt. Buxton had a place to sleep under shelter. When he learned that there was no place for us to sleep, where we could be sheltered from the rain, he gave up his sheltered place to me, and ceased not his efforts until he had procured a shelter for the other three men. This being done he laid down upon the ground, and passed the night unsheltered from the rain. When any of us were sick, he would carry our guns and knapsacks for us." Rev. L. Barber, chaplain of Capt. Buxton’s regiment, in a letter to Mrs. Buxton, announcing to her the sad news of his death, pays a just tribute to his worth. He says, "How gladly I would, were it possible, speak words of comfort in this hour of your terrible affliction and grief: - but words are vain in an hour like this. Your husband was a noble man – a brave and excellent officer, - respected and beloved by all who new him. I respected and admired him for his many excellent qualities, and for his prompt and fearless discharge of every duty, - especially his duties as a christian. In the discharge of the very difficult duties of chaplain of the regiment, I could always rely upon your husband’s co-operation and aid. Whenever there was an opportunity, his voice was heard in our circles for prayer. His life confirmed the christian profession he made, and was a standing protest to the immorality and vice of life in camp."

Capt. Buxton was attended to his dying hour by one of his men, Mr. Beach, to whom he confided his message for his wife. Mrs. Buxton heard of the death of her husband, and that Mr. Beach would communicate to her his dying message. But alas! While the widowed wife waited to receive the last words of her husband, the battle was still raging, and Mr. Beach was killed before he had an opportunity to comply with request f his dying captain. But enough is known to justify the assurance, that he was content to died for his country – in defence of its honor – in defence of its flag. When he decided to enlist he made known his intention to Miss Rico, to whom he was then engaged. He declared that his country was entitled to his services and that he must go. Miss Rico pointed out the hardships and dangers to be encountered, and the probability that he would never return. His reply was – "If I was unwilling to died for my country, I would not enlist."