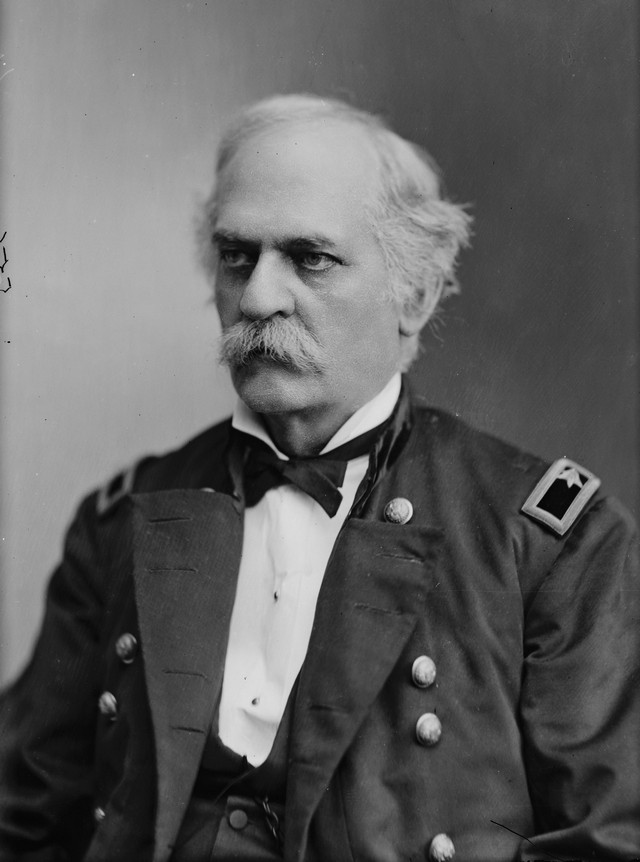 Benjamin Alvord was born 18 August 1813, in Rutland, Vermont. He graduated from West Point in 1833, served in the Seminole and Mexican wars, was a mathematics instructor at West Point and served as a paymaster before the war. In April 1862 he was appointed Brigadier General of Volunteers and commanded the District of Oregon until March 1865. After the war he continued to serve in the army as a paymaster, retiring in 1880. He was also a writer on mathematical and botanical subjects. He died 16 October 1884, and is buried in Evergreen cemetery, Rutland, Vermont.

Alvord was assigned as 1st Lieutenant in the Fourth U.S. Infantry in 1836, was promoted to Captain in 1846, and major in 1852. He accepted an appointment as Brigadier General of Volunteers 15 April 1862, and resigned from the volunteer service 8 August 1865. He was appointed Brigadier General and Paymaster-General of the United States Army in 1876, and retired from active duty in 1880.

General Alvord was born at Rutland, Vt., on August 18, 1813, and was graduated at West Point in 1833. He entered upon active service as a brevet second lieutenant and from 1833 to 1854 he served chiefly at frontier posts with the 4th Infantry. He took part in the Florida War (1835-37), and in 1841 and 1842 he was engaged at Camp Izard, Olaklikaha, Thlonotosassa and Big Cypress Swamp. From 1837 to 1839 he was an assistant professor at West Point and in 1839 and 1840 he was stationed in the Cherokee Nation. He took part in the military occupation of Texas (1845-46) and in the war with Mexico (1846-47), being engaged at Palo Alto, Reseca de la Palma, Paso Orejas, National Bridge, Cerro Gordo, Las Aminas, and Huamantha. He became a captain and brevet major during the Mexican War. In 1854 he was transferred to the Pay Department, with the rank of Major, and from that time until 1862 he served as Chief Paymaster of the Department of Oregon. In 1862 he became Brigadier-General of volunteers and took command of the district of Oregon. At the close of the war General Alvord was made a brevet Brigadier-General in the Regular Army, and from 1865 to 1867 he served as paymaster in this city. He was Chief Paymaster in Nebraska from 1867 to 1872, when he was Paymaster-General of the Army with the rank of Brigadier-General. He was placed on the retired list in 180 at his own request. General Alvord was the author of “Tangencies of Circles and Spheres” (1855), “The Interpretation of Imaginary Roots in Questions of Maxima and Minima” (1860), and many essays and reviews.