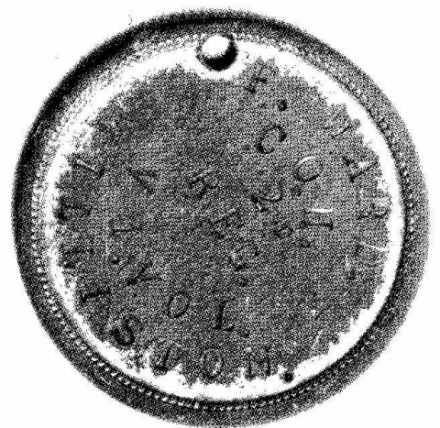 It was early spring, quite windy, and the skies over Poolesville, Maryland, were overcast. Henry Winkler, Bill Longo, and I had just crossed a deep ravine and fought our way through some of the thickest briars I had ever seen. I stopped to catch my breath on the rim of a small hill.

Poolesville is a sleepy hamlet along the Potomac River, west of Washington, D.C. Union troops spent the winter of 1861 here as part of the defense of our nation's capital. The town hasn't changed much in 130 years, making it an ideal area for metal detecting, and so far that day we had recovered several minnie balls, and a button or two from an area farm. Bill had unearthed the best find of the day, a silver 1853 three-cent piece.

There on the rim of that hill, my metal detector emitted a loud signal. Another minnie ball, I thought, as I began to sift through the dirt. To my surprise, I saw the glitter of gold. It appeared to be a large coin, but it's difficult to be certain when you're well on the other side of forty and you've left your glasses back in the car. I called to Henry, who was nearby. He looked at the quarter-size disc and congratulated me. "I've been relic hunting for fifteen years and I've never found an I.D. tag," he said.

The tag turned out to be one of the more common types offered by sutlers during the war years. One side featured an eagle with outspread wings, with "The War of 1861" above and "United States" below. (At the outset of the war, many were optimistic that it would be a short conflict.) The other side of the gold-washed disc read: "F. Ward, Co.H, 2nd Reg., Vt. Vol. Williston."

Who was F. Ward? Did he survive the conflict? What became of him?

A search of the Pension Records of Civil War veterans at the National Archives in nearby Washington, D.C., revealed that F. (Frank) Ward had indeed survived. His file is lengthy, filling two manila folders. 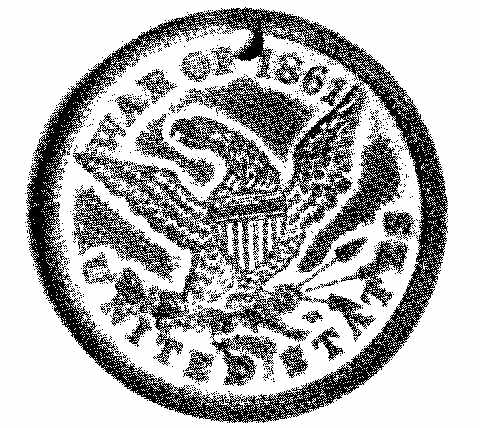 Frank Ward was born July 29, 1844, in Williston, Vermont, the son of Bernard and Bridget Ward. He enlisted at Fletcher on May 25, 1861, for a period of three years. His pre-war occupation was shown as laborer, and he stood 5'8" tall with blue eyes and red hair. Three years later, on January 31, 1863, he reenlisted at Brandy Station, Virginia, whereupon he began a 35-day furlough. On June 15, 1865, at Halls Hill, Virginia, Frank Ward left his soldiering days behind him.

The post-war story of Frank Ward, like those of so many veterans of so many wars, is one filled with sadness. When reviewing his story, the modern term post-traumatic stress syndrome comes to mind; during the Great War it was more simply termed "shell shock," and during the Civil War it went by the descriptive "thousand-yard stare."

"About 21st day of July 1861, at the Battle of Bull Run, Va., I received a sunstroke and have had trouble with my head from that day to present..." Frank Ward wrote these words on April 19, 1890, in a letter to the commissioner of pensions in support of his Pension Claim No. 612534. His letter continued: "...and about April 15th, 1865, at Burkville Junction, Va., I had another sunstroke and that increased the troubles with my head." His letter goes on to describe additional ills, problems, and pain, but he, unlike many of his Vermont comrades, had been able to return to Williston at the close of the war.

In the three years following his discharge, Ward worked in a variety of occupations, among them railroad brakeman, farmer, and laborer at a woolen mill. On September 15, 1868, he married Mary Lynough at the Cathedral of the Immaculate Conception in Burlington, Vermont. Over the next twelve years he and Mary produced five children - Mary E. in 1872, Henry in 1874, Frank, Jr. in 1876, Bernard in 1878, and William in 1880.

In 1872 he began work as a fireman at Gates' Mill in Burlington, where he was responsible for maintaining a fire in a stationary engine. For the next eleven years, his letter stated, "my head troubled me all the time... so that I had to quit work and leave my family and go into the country onto a farm and work for my board and clothes." The year was 1883 and the farm, which was in Richmond, belonged to Daniel Sheehan. Ward remained there until 1894, and while he received no wages for the work of plowing and caring for the cattle, he did have a roof over his head and clothes on his back.

Mary did not fare as well. At some point during those eleven years, she was forced to place the children in a convent. She also worked in a mill, possibly the same woolen mill at which Frank had been employed early in their marriage. In the spring of 1901, Mary attempted suicide, and on April 23rd of that year Frank had her placed in the Vermont Hospital for the Insane. She was discharged on September 5, 1906, but it is not known if Frank and Mary ever lived together again.

On November 21, 1909, at age 65, Frank Ward died. He was boarding at the Burlington Hotel on Cherry Street at the time. Mary followed him in death in 1917, and she is buried alongside Frank and their eldest daughter, Mary, who succumbed to death at age 26. All three were laid to rest in St. Joseph's Cemetery. The fates of the Ward sons are unknown, but it is quite possible that their descendants continue to live in the Burlington area.

My research to date has not indicated that the 2nd Regt., Vermont Volunteers., was ever encamped at Poolesville, Maryland. How Ward's I.D. disc came to rest there in Maryland soil remains a mystery.

Author James E. Haas' New Book
This Gunner at His Piece: College Point, New York and The Civil War
With Biographies of the Men Who Served