The Fairbanks Brothers
of Bethel and Royalton

By Grant and Lee Fairbanks

Luke Bowen Fairbanks was born in Royalton, Vermont, 26March, 1838, son of Lorenzo Dow & Esther (Bowen) Fairbanks. His grandfather, Calvin Fairbanks II moved from Hardwick, Massachusetts to Barnard, Vermont before 1800. His father, Lorenzo was born in Royalton and lived there farming until he moved to Mower County Minnesota in 1873. Luke came from a large family of nine children. He was the middle child. He had six brothers and three sisters. He moved with the family to Mower County, Minnesota, and was living in the town of Austin when the Civil War broke. He came back East to Vermont where he enlisted for service at the age of 22 yrs. His first enlistment he was mustered in as company corporal of Company "F", 3rd Vermont. He re-enlisted and was promote sergeant in 1863. He received wounds at Lee's Mills, and was taken as a prisoner of war. He was exchanged and promoted first lieutenant of Co. "H", and subsequently captain of Co. "C". He served throughout the war until he mustered out 11 July, 1865. He married his childhood friend and sweetheart in 1863, Caro FrancesBowen (b. Royalton, Vt. 16 Jan., 1843, dau. of Marcus & Sarah Louisa (Harris) Bowen). They moved first to Lincoln (Washington County) Kansas where they had a small farm valued at $1,000 and $500 in personal property. By 1880 they had moved to Windom (Mower County) Minnesota, to be near other members of Luke's family who settled there. In June, 1900, the Fairbanks family was living on Water Street in Austin, Minnesota. Luke and Caro had eight children together with seven still alive in 1900. All lived near and around their parents in Austin. Luke d. in Windom (Mower Co) Minnesota, 23 Oct., 1907 (age 69). Caro survived him by 37 years, dying at the advanced age of 100 at the home of her son in Yakima, Washington, 9 Jan., 1944. 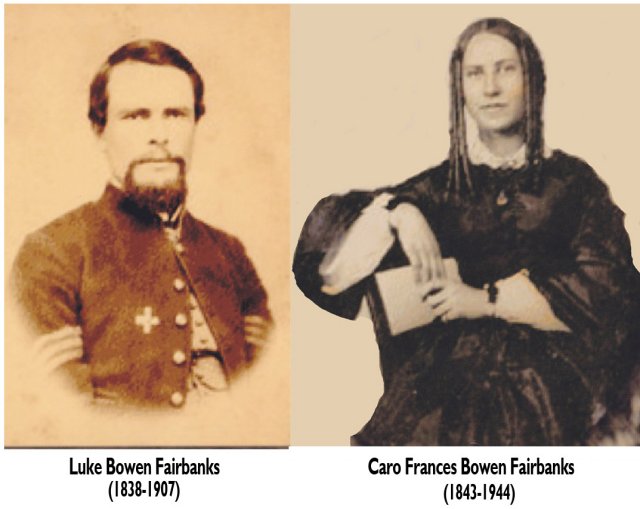