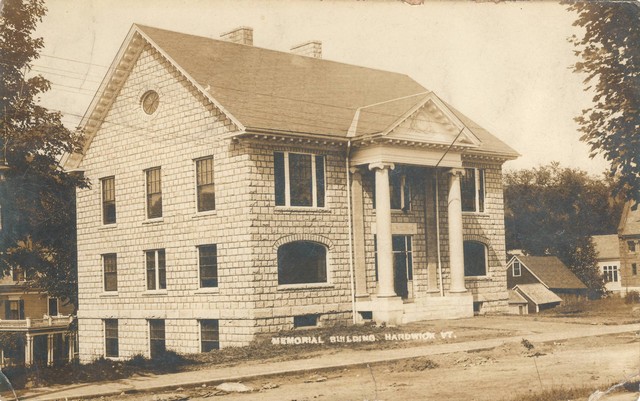 Building to the Sailors and Soldiers of the Civil War Will Cost $13,500.

Hardwick, May 23. -- At the special town meeting Saturday afternoon the town voted to appropriate the sum of $13,500 for a memorial building to the soldiers and sailors who served during the War of the Rebellion. The town had previously appropriated $1,500 for the purpose, and the local G.A.R. post and Relief Corps have $2,500, which they have raised for this purpose by subscription.

The village voted to give the present site occupied as the lockup and hose house. The building will be moved back from its present location.

The memorial building will be of brick, three stories high. The lower floor will be occupied by the town and village for their offices and the second and third stories by the G.A.R. and Relief Corps.

Hardwick Memorial Building to be
Opened with Public Exercises.

The newe memorial building at Hardwick is practically completed and will be dedicated on Thursday, Feb. 29. Gov. John A. Ead and Lieut.-Gov. L. P. Slack of this village have been invited to attended the ceremonies but the complete program has not been made public.

The building is one of the finest municipal buldings in the state and has been erected as a memorial building for the veterans of the Civil War and for use by the town officers. It faces on Church street where it is two stories high and the rear is on Main street where it is three stories high. On the top floor is the G.A.R. hall and other post rooms. On the main floor is a memorial room with marble wainscoting on which is cut the names of all the soldiers who enlisted from the town and rooms for the town officials. In the basement is a banquet hall and kitchen to be used by the G.A.R. and other organizations.