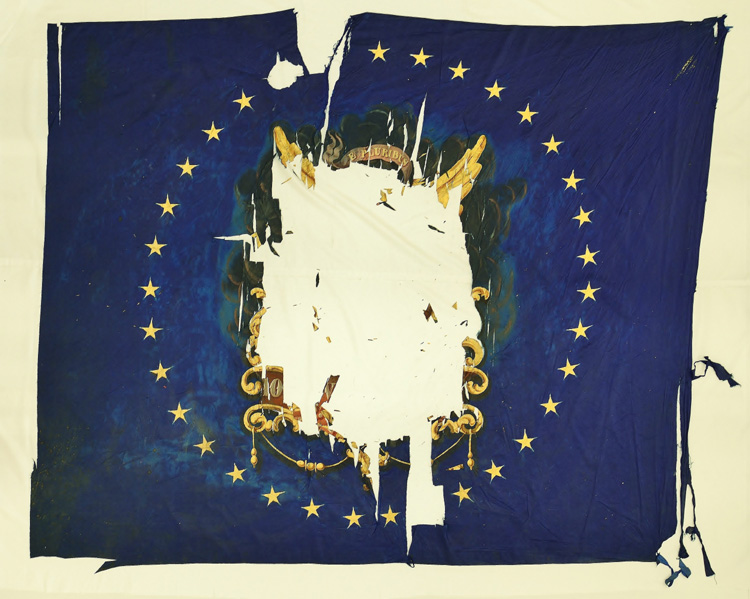 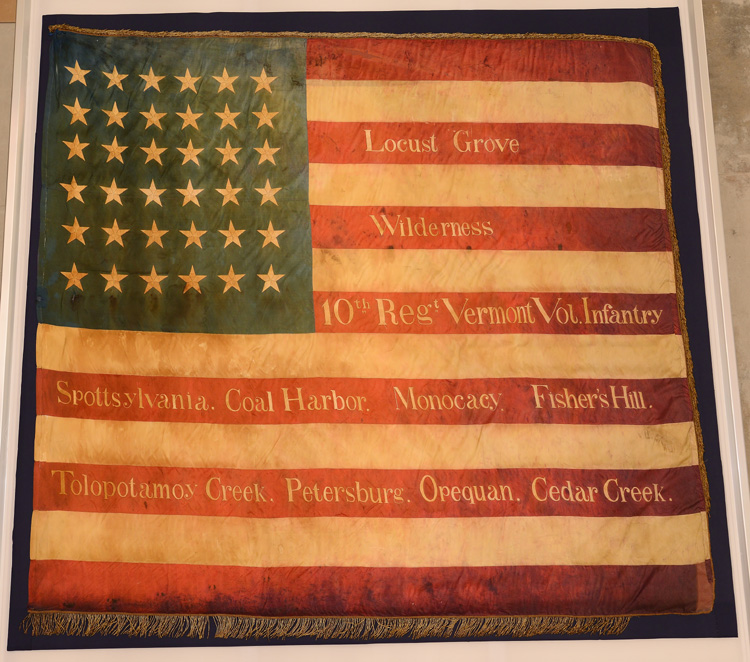 The 10th Regiment, composed of members from all portions of the state, was mustered into the U. S. service at Brattleboro, Sep. 1, 1862, for three years, and left camp on the 6th for Washington, where it spent a few days at Camp Chase, and was then posted along the Maryland side of the Potomac to guard the fords near Edwards' Ferry. The winter was spent in the vicinity of Seneca creek and on June 22, 1863, it was ordered to Harper's Ferry, where it was assigned to the 1st brigade, 3d division, 3d corps, with which it served until the reorganization of the Army of the Potomac in March, 1864, when it became a part of the 1st brigade, 3d division, 6th Corps. The regiment was in action at Locust Grove, Nov. 27, 1863, and was quartered at Brandy Station, Va., during the winter of 1863-64. At the beginning of the Wilderness campaign, it was not in the thick of the fight and it was not until the battle of Cold Harbor that it suffered heavily, when its services were especially complimented in orders. The 6th Corps was sent to Bermuda Hundred, while the army advanced to Petersburg but soon re-joined the main body. On July 6 the 3d division was ordered to Harper's Ferry, but the 10th and one regiment of the 2nd brigade was detained with the 1st brigade at Frederick City, Md., and under Gen. Wallace it engaged the enemy there on July 8 and at Monocacy on the 9th. The 10th then became a part of the army under Gen. Sheridan in the Shenandoah Valley and participated in the battles of Winchester, Sept 19, Fisher's Hill, and Cedar Creek. After a short rest at Cedar Creek and Kernstown it returned to Petersburg on Dec. 3 and was active at the time of the assault upon Fort Stedman in March, 1865, capturing 160 prisoners. The regiment shared in the final assault on Petersburg, April 2, and was among the first to enter the captured city. It then joined in the pursuit of Lee's army and after the surrender was sent to Burlington, where the men were mustered out on June 27, 1865. Fourteen officers and 136 men were transferred on June 22 to the 5th Vt. infantry and were mustered out on the 29th.

The total strength of the 10th was 1,306 members, of whom 149 were killed or died of wounds, 153 from disease, 32 in prison and 2 by accident. The regiment is included as one of the "three hundred fighting regiments" in Fox's "Regimental Losses." The following officers of this regiment were brevetted for gallant and meritorious service: Capt. and LtCol. George B. Davis, Lieut. Austin W. Fuller, Col. and Brig.-Gen. William W. Henry, Capt. and Maj. John A. Hicks, Lieut, and Capt. Silas Lewis, Lieut, and Capt. James M. Read, and Maj. A. Salsbury.