Travels of a Sketch of Some Officers
and Men of the 10th Vermont
Volunteers.

Mr. Alexander Scott of 1,201 Kenton street received to-day from Gen. William W. Henry, United States consul at Quebec, a letter containing two pictures that were made years ago to illustrate the history of the 10th regiment of Vermont volunteers. Several years ago Mr. Scott, who was a member of the 10th Vermont, conceived the idea of illustrating the history of the regiment with some pictures, one of which was made during the Civil War. This was a copy of a photograph taken at Culpeper, Va., in September, 1863, and showed a group of men standing beside a tent. In the group were Capt. S. Darrah, Lieut. G. E. Davis, Lieut. L. A. Abbott, Dr. A. Clarke, (Pvt.) John Lamoine and (Pvt.) Henry Falkins. (The article fails to mention Sergt. Major. G. P. Welch, who was also in the picture). Lieuts. Davis and Abbott are still living (as is Welch). The former resides in Burlington, Vt., and the latter in this city, he being a retired coonel of the regular army. A drawing was made from this photograph by Mr. Clifford K. Berryman, and the plates for the book were made by a local litographing (sic) establishment. It appears that not long ago the employes of this establishment were cleaning up the place, and threw into a waste box a quantity of old proofs, etc. The day must have been windy, as some of the proofs flew away from the waste box and into the establishment of Mr. Frank Hume. The paper on which the proofs were made was yellow with age. Mr. Hume found the proof. He thought the picture had come from an old wartime publication, and determined to make efforts to find some member of the 10th Vermont and give him the picture.

There were two pictures on the proof. Mr. Hume placed the sheet in an envelope, which he addressed to the post-master at Montpelier and asked the postmaster to find some member of the regiment and give him the picture, signing himself "Frank Hume, Company A, 21st Mississippi regiment, Barksdale's brigade, Army of Northern Virginia."

Postmaster Bancroft of Montpelier learned that General Henry had been colonel of the regiment and that he was United States consul at Quebec and sent the pictures to him. General Henry recognized the pictures, but could not understand why they had been sent to him, and sent them to Mr. Scott, who received them this morning. Mr. Scott was much amused at the incident by reason of the fact that the pictures had originated with him, were made in a Washington establishment; were found by an ex-confederate soldier and sent all the way to Canada, only to come back to Washington and to the man who had originally had them made.

The sketch of a group alluded to above, engraved on wood, forms the frontispiece to the second edition of Chaplain Haynes's History of the Tenth Regiment Vermont Volunteers, published in 1894. The other picture is a device of crossed flags and corps badges, which faces the frontispiece. (The copy of the book I have has the second picture inside the back cover.) 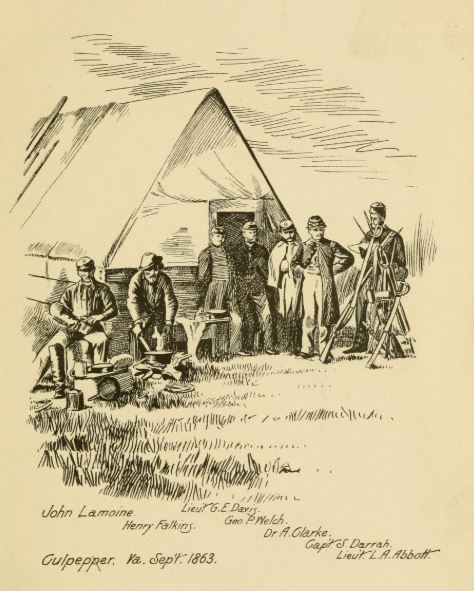 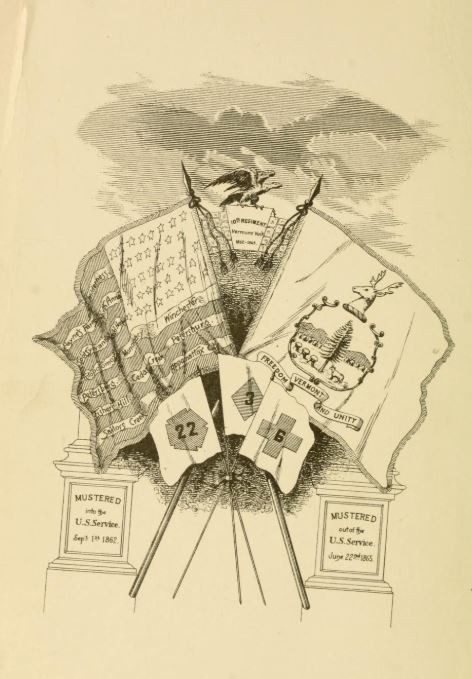