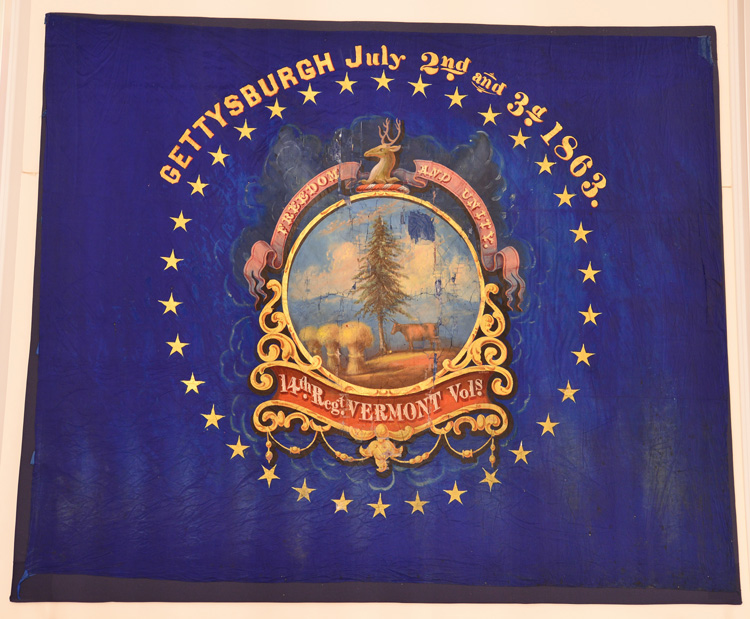 The 14th Regiment was one of the five Vermont regiments raised under the call of Aug. 4, 1862, for 300,000 militia to serve for nine months. It was recruited in the counties of Addison, Rutland and Bennington, and comprised the following companies : Co. A, from the town of Bennington; Co. B, Wallingford; Co. C, Shoreham; Co. E, Middlebury; Co. F, Castleton; Co. G, Bristol; Co. H, Rutland; Co. I, Vergennes ; and Co. K, Danby. The several companies rendezvoused at Brattleboro on Oct. 6, 1862, and were mustered into the U. S. service for nine months on the 21st. The following day it left for Washington with 952 officers and men. Col Nichols was a prominent young lawyer of Rutland; had been a member of the Rutland Light Guard, and had served with the 1st regiment. Lieut.-Col. Rose had been a lieutenant of the Middlebury company of the 1st regiment; was afterwards captain of Co. B of the 5th, and was wounded at Savage Station. Maj. Hall was a son of Ex-Gov. Hiland Hall; a successful lawyer and state's attorney of Bennington county, when commissioned, but was without previous military experience. On its arrival in Washington on the 25th, the 14th was temporarily brigaded with some Maine troops, but a few days later was united with the other nine months' regiments to form the 2nd Vermont Brigade. The command was assigned to duty in the outer defenses of Washington, serving first at Alexandria, Va., then in the vicinity of Fairfax Court House, where it assisted on Dec. 28, 1862, in repulsing Stuart's cavalry raid, and was posted at Wolf Run shoals on the Occoquan river, from March to June, 1863. In addition to picket duty it performed arduous fatigue duty, digging rifle pits and building corduroy roads. On April 20, 1863, Brig.-Gen. George J. Stannard took command of the brigade, and on June 25 the brigade was assigned to the 3d division, 1st corps, and began its march to Gettysburg. It marched 120 miles in 6 days, reaching Emmettsburg, Md., on the 30th. It arrived on the battle-field too late to share in the first day's fighting and encamped for the night in a wheat field to the left of Cemetery hill. On the afternoon of the 2nd day it went into action on the left center, where it remained during the remainder of the battle. Its chief loss was sustained on the 3d day during the splendid charge of Pickett's men. The 14th behaved with the steadiness and gallantry of veteran troops, executing a number of difficult movements while under a heavy fire of artillery and musketry. Its casualties were 18 killed, 9 mortally and 65 severely wounded, the heaviest loss in killed and wounded sustained by any regiment in the brigade. After the battle it joined in the pursuit of Lee's army, making a number of hard marches. On July 18, its term of service having expired, it started for home, and was mustered out at Brattleboro, July 30, 1863.

The total enrolment of the regiment was 964, of whom 27 were killed in action or mortally wounded; 39 died of disease; 1 died in prison and 1 was murdered - total deaths 68. It lost not a man by desertion; 65 were wounded.