This the gravestone of Smith William Jameson located at Factory Point Cemetery in Manchester, VT. It was erected in 1922, shortly after his death. 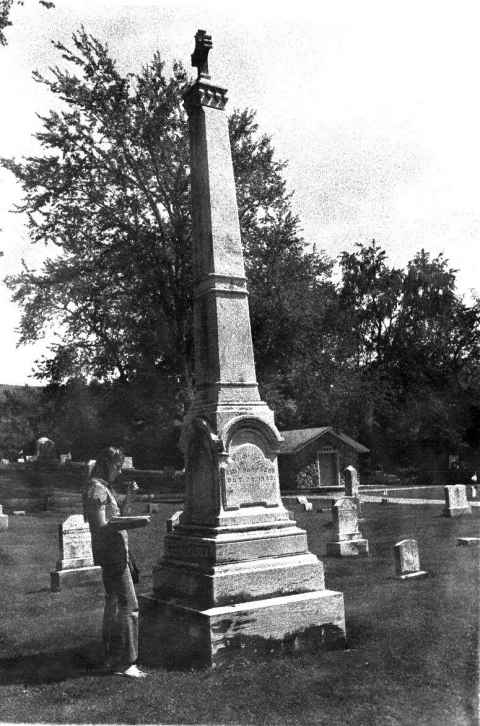 Smith Jameson at the age of 20 enlisted into the United States Army on August 28, 1862, mustering with the 14th Regiment of the Vermont Volunteers.

He fought at Fairfax County Courthouse, Virginia December 28, 1862. On the afternoons of July 2 and 3, 1863 he was at Gettysburg with his cousin, Myron Jameson. On July 30, 1863, he and Myron were honorably discharged from service and returned home to Manchester.

While on business in New Hampshire, Mr. Jameson met and married Mary Glasier of Keene, NH. Samuel Glasier was born in Manchester, VT., but migrated to Bedford, Ohio where his daughter, Mary, was born. They returned to the area and resided in Keene, NH. Mrs. Samuel Glasier was born in Granville, New York. Smith and Mary were married by Rev. Silas Hardy and they returned to Manchester where they died. Mr. Jameson became a charter member of Skinner Post 24 of the G.A.R. on May 9, 1873.

After his wife's death in 1883, Mr. Jameson remarried and settled upon his farm in the Barnumville section of town. A farmer by occupation he was also musically inclined playing the piano, violin, and the drums, and operated a stone cutting business on the side. His farm was located a mile north east of Manchester Center in District 8, while his crops grew in district 15 across the road. He was involved in a variety of land transactions in town from 1894 to 1922. Some of his more intimate friends were: Myron Jameson; Henry A. Wyman; Charles Edgerton; Lt. Andrews of Manchester; Captain Munson also from Manchester; and Henry D. Young. Mr. Jameson drew a pension of $6.00 a month and by 1922 at $50.00 per month.

In 1904 he became the musical instructor for the Manchester Union Band and until 1921 he paraded each year beating the drums. He died from a fall off a stoop and cracking his skull. His will1 was dated August 14, 1909 and probated 1923 leaving everything to his wife, Josephine, who he made his executrix. Mrs. Josephine Jameson remained in Manchester for a number of years before removing to Rutland, Rutland County, Vermont where she died.

Contributed by Scott M. Jameson, from family and military records.