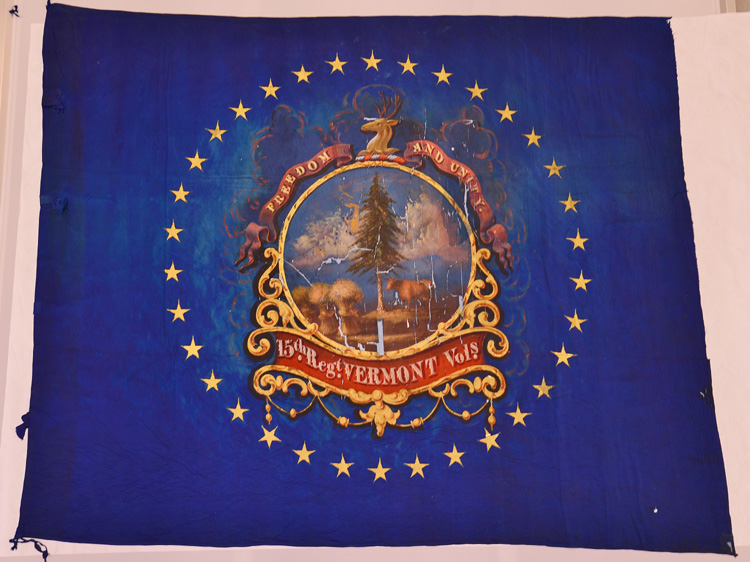 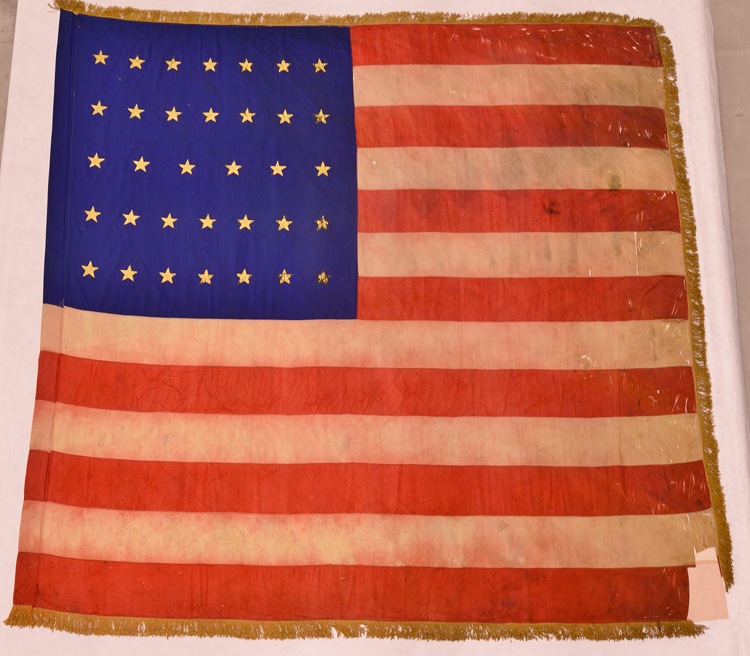 The 15th Regiment was one of the five Vermont regiments enlisted under the President's call of Aug. 4, 1862, for nine months' service. It was recruited in the counties of Caledonia, Orleans, Orange and Windsor, one of its companies, the Frontier Guards of Coventry, being one of the thirteen existing companies of uniformed militia which first responded to the call. The companies perfected a regimental organization on Sep. 26, 1862; rendezvoused at Brattleboro Oct. 8; were mustered into the U. S. service for nine months on Oct. 22, and left the state for Washington on the 23nd. Col. Proctor had seen previous service as quartermaster of the 3d Vt., and afterwards as major of the 5th. He was a fine type of the civilian soldier and was one of the best colonels in the service. His fine qualities later placed him in the highest office within the gift of the state. LtCol Grout was a rising young lawyer of the Orleans county bar, and Maj. Spaulding was a business man of St. Johnsbury, though neither was experienced in military affairs. After the arrival of the 15th in Washington on the morning of the 26th, it was temporarily assigned to the 2nd brigade, Case's division, and a few days later joined the other Vermont regiments to form the 2nd Vt. brigade. It was stationed at "Camp Vermont" near Hunting creek, engaged in drill, picket and fatigue duty, until Dec. 12. From that date until the following spring it was stationed one mile south of Fairfax Court House, occupied in drill and fatigue duty on rifle-pits. At the time of Gen. Stuart's raid in the rear of Fairfax Court House, Dec. 28, 1862, it picketed all the approaches to Centerville, and during May, 1863, it was on picket duty at Bealeton Station for a few days with Gen. Stoneman's Cavalry, after which it returned to Bull Run, with headquarters at Union Mills. On May 30 a detachment of 15 men guarding a supply train, near Catlett's station, was overpowered by a superior force of Mosby's men and the train was partially burned. The regiment was employed during part of June in guarding the Orange & Alexandria railroad at Catlett's and Bristoe Stations. On June 25, with the rest of the brigade, it began its long forced march to join the 1st corps at Gettysburg. At Emmettsburg on the 30th, the 15th and 12th regiments were detailed to guard the corps train, which they escorted to within about 2 miles of the battle-field on July 1. That evening the 15th was ordered to join the 13th, 14th and 16th, and bivouacked in a wheat field to the left of Cemetery hill. At noon of July 2, while serving as support to the batteries on Cemetery hill, it was ordered to return again and assist the 12th in guarding the train. A detail of two companies, with two from the 12th, had charge of the 1st corps ammunition train near the battlefield. The command overtook the train at Westminster, and moved with it via Frederick City and South mountain towards Hagerstown, Md., rejoining the brigade at Funkstown. During the pursuit of Lee it formed in line of battle on the right of the 1st corps in front of Hagerstown, 200 men of the 15th being thrown forward as skirmishers. When Lee effected his escape into Virginia the regiment was ordered home, arriving in New York City during the draft riots. Its term of service had expired, but it remained at the request of Gen. Canby until order was restored. It was mustered out of service at Brattleboro, Aug. 5, 1863.

The total enrolment of the 15th was 942, of whom 78 died by disease, 1 committed suicide, 1 deserted, 69 were honorably discharged, 1 was transferred to veteran reserve corps and 5 were captured.