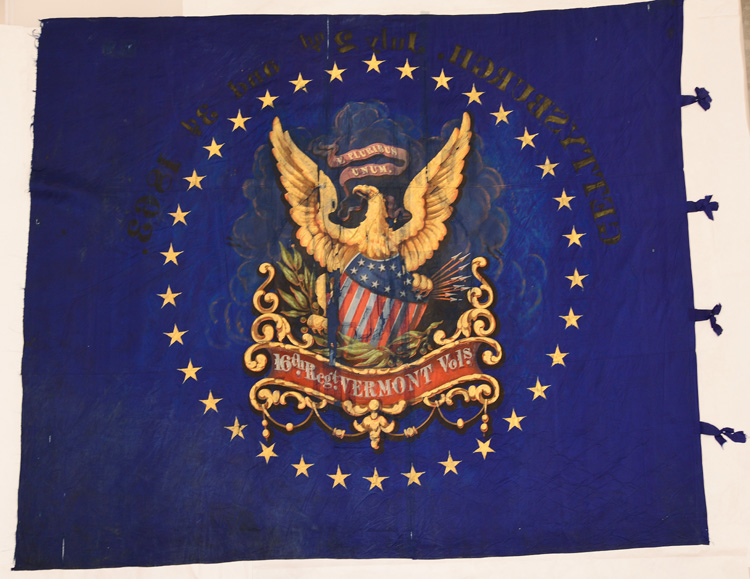 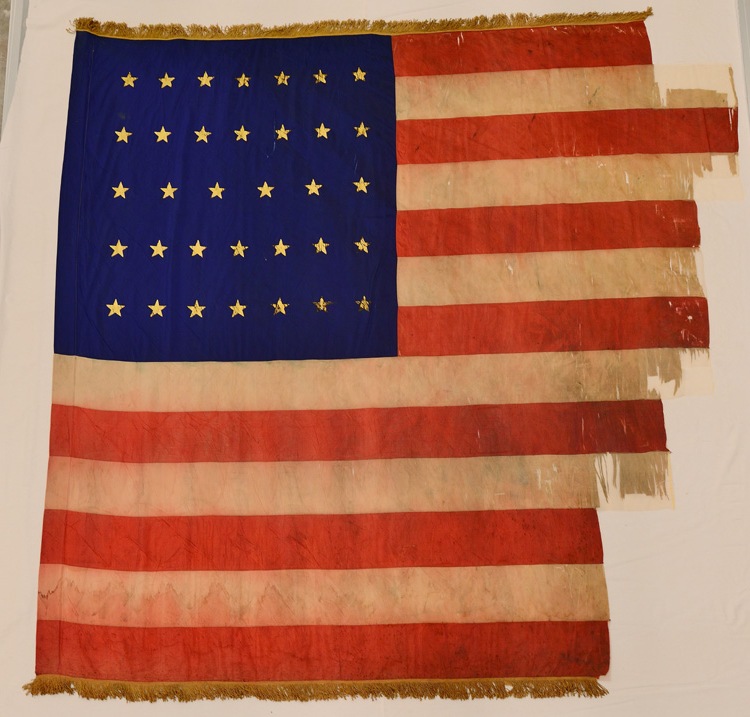 The 16th Regiment, composed of men from Windsor and Windham counties, was organized Sep. 27, 1862, rendezvoused at Brattleboro Oct. 9, and was mustered into the United States service for nine months on the 23d. It was one of the five nine months' regiments recruited in Vermont under the call of Aug. 4, 1862, for 300,000 militia. Col. Veazey, a graduate of Dartmouth College, had received excellent training in military affairs as captain, major and lieutenant-colonel in the 3d Vt. infantry, and as commander of the 5th Vt., during part of the Peninsular Campaign. He was an excellent officer and commanded the complete confidence of his regiment. LtCol Cummings had served as first lieutenant of Co. E of the 11th Vt., afterwards returned to the service as lieutenant-colonel of the 17th Vt., and was killed while commanding that regiment at the battle of Poplar Grove, near Petersburg, Va. Maj. Rounds was a well known lawyer of the Windsor county bar, but without previous experience in military affairs. The regiment had an unusually large number of intelligent and well educated men and contained some of the best blood of the state. It left Brattleboro on Oct. 24, 1862, with 949 officers and men, for Washington, and on its arrival there was brigaded with the other Vermont troops to form the 2nd Vermont Brigade. On Oct. 30, it moved with the brigade, to Ball's cross-roads, Va., and then to Hunting creek, where it established "Camp Vermont." On Dec. 11, it moved farther to the front and was stationed at Centerville and Fairfax Court House until Jan. 20, 1863. It was then at Fairfax Station on the Orange & Alexandria railroad until March 24, when it moved to Bull Run and was chiefly occupied in guard and picket duty. In the latter part of May it was stationed by detachments at various points on the railroad on guard duty. At Catlett's station, on May 30, Mosby's raiders attacked a supply train and inflicted considerable damage. On June 11 it returned to Union mills and resumed picket duty along Bull Run. Lee's great invasion into Pennsylvania was now under way, and on June 23 the brigade, commanded by Gen. Stannard, was assigned to the 1st corps of the Army of the Potomac. Two days later it received orders to join the corps and started on its long forced march to Gettysburg. It reached Emmettsburg, Md., on the 30th and after a hurried march the following day reached the battle-field at the close of the first day's fight, going into position on the left on Cemetery hill. The regiment was engaged on the afternoon of the 2nd, Co. B, under Capt. Arms being detached to reinforce the skirmish line in the morning and rendering efficient service. While moving in the afternoon to the left along Cemetery ridge to reinforce the shattered Union lines, it was exposed to a heavy artillery fire, and finally halted in support of a battery. That night it was detailed for picket duty across the field of the afternoon and during the fierce fighting of the 3d day, it held the same advanced position on the skirmish line. During the famous charge of Longstreet's three divisions the 16th was heavily engaged, twice changing front under a severe artillery and musketry fire and charging the enemy's flank. It captured prisoners several times in excess of its own numbers, together with 3 stands of colors, and after the battle followed in pursuit of Lee's retreating army until Lee crossed the Potomac into Virginia, when it was ordered home, its term of enlistment having expired. It arrived in New York during the draft riots and remained there until order was restored. It was finally mustered out at Brattleboro, Aug. 10, 1863.

The total enrolment of the 16th was 968, of whom 24 were killed in action or mortally wounded; 48 died of disease and 1 died in prison - total deaths, 73. Eighty men were wounded, 4 were captured and 2 deserted.