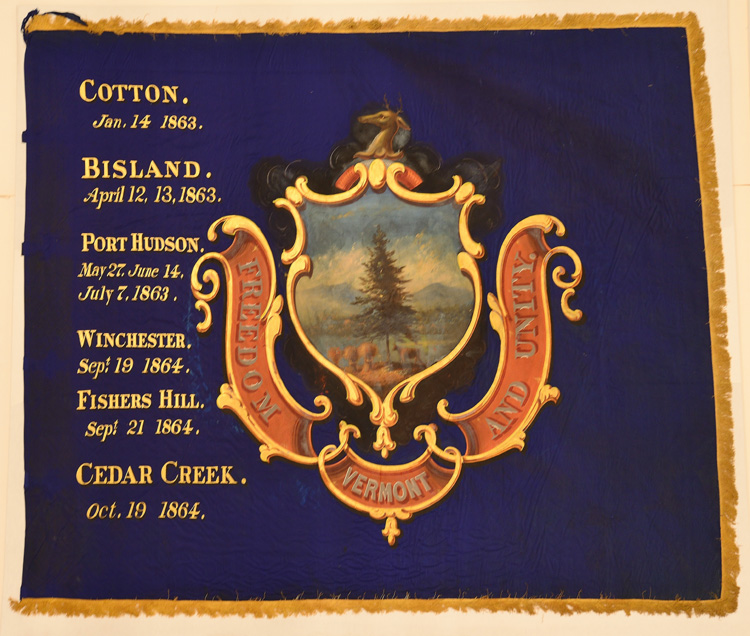 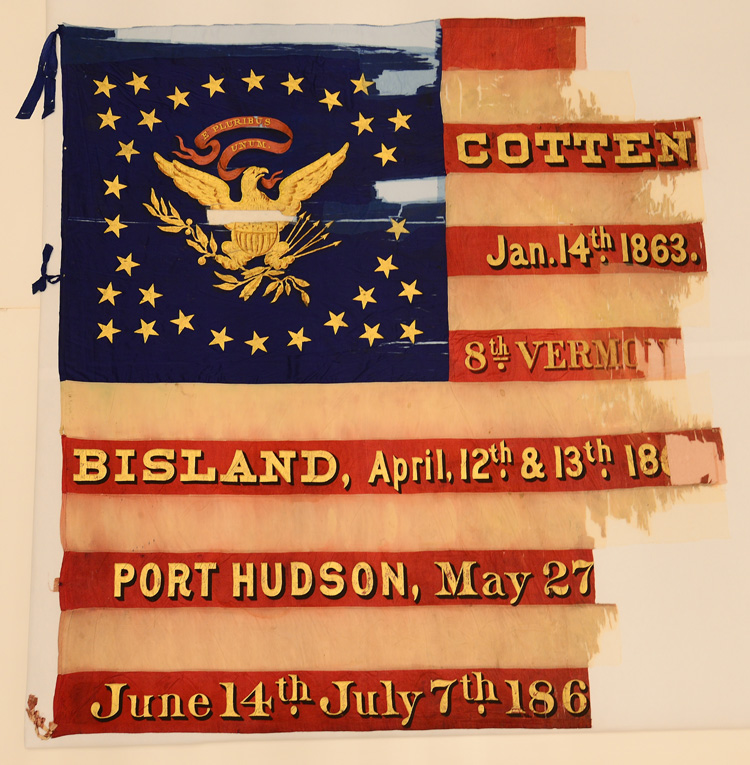 The 8th Regiment, recruited for Gen. Butler's southern expedition and rendezvoused at Camp Holbrook, Brattleboro, was mustered into the U. S. service for three years, Feb. 18, 1862. It remained in camp at Brattleboro until March 4, when it left for New York, there to embark for Ship Island, Miss. From April 5 until early in May it encamped at Ship island and was then ordered to New Orleans, where it was quartered in the Mechanics' Institute building until the end of the month, when it crossed to Algiers and Col. Thomas was placed in command of the district of La Fourche. It opened the Opelousas railroad as far as La Fourche crossing, and was engaged for some months in guarding the road. On June 22, a detachment of 30 men from Co. H was ambushed at Raceland Station, losing 5 killed and 9 wounded, the first blood shed in the regiment. On Sep. 4, another detachment of 60 men was ambushed at Boutte Station by a Confederate force of 1,500 men, and lost 15 killed and 20 wounded. The same force of the enemy then moved on Bayou Des Allemands Station, and compelled the surrender of Capt. Hall, Lieuts. Sargent, Green and Mead, and 137 men. Among those surrendered were 7 Germans, who had enlisted at New Orleans, and who were promptly condemned and shot on the pretext that they were deserters from the Confederate army. In October, as a part of Gen. Weitzel's brigade, the 8th began the work of opening the Opelousas rail-road to Brashear City, which was completed on Dec. 8. It was encamped at Brashear City until Jan. 8, 1863, when it moved to Camp Stevens at Thibodeaux, but returned after two days, and shared in the expedition against the gunboat "John L. Cotton," located in the Bayou Teche, during which it performed excellent service, but suffered no loss. On April 12 it moved with the 19th corps in the advance to Port Hudson, having a brisk engagement with the enemy at Fort Bisland on the same evening, which was resumed on the 13th. In the desperate assault on Port Hudson, May 27, Col. Thomas commanded the brigade, and the 8th again distinguished itself for gallantry, losing in this battle 12 killed, and 76 wounded, among the latter Col. Thomas, Capt. Foster and Lieut. Welch. It now shared in the siege operations and on June 14, led the assaulting column in the second attack on the Confederate works. Its loss on this occasion was 21 killed, and 75 wounded. After the surrender of Port Hudson it was ordered to Donaldsonville, thence to Thibodeaux, where it encamped until Sep. 1, when it moved to Algiers and took part in the fruitless Sabine Pass expedition, returning on Sep. 11. On Jan. 5, 1864, 321 men reenlisted for another three years' term and received the usual veteran furlough. The remainder of the regiment, including the recruits, remained in active service at Algiers and Thibodeaux, until June 6, when they returned to the state and were mustered out at Brattleboro on the 22nd. The veteran portion of the regiment returned to New Orleans and after a number of scouting expeditions embarked for Fortress Monroe on the steamer St. Mary, July 5. On its arrival there it was at once ordered to Washington to assist in resisting Gen. Early's attempt upon the city, after which it was ordered to join the 6th Corps at Tenallytown, Md. It then moved with the army in pursuit of the enemy as far as Berryville, Va., in the Shenandoah Valley, but immediately countermarched to the vicinity of Washington, whence they were ordered back into Maryland during the flurry caused by McCausland's raid into that state. The severe marching of this month on half rations, will never be forgotten by the men. In Aug., 1864, Gen. Sheridan took command of the Army of the Shenandoah, and the 8th was assigned to the 2nd brigade (McMillan's), 1st division (Dwight's), 19th corps, under Gen. Emory. It did gallant service at the battle of the Opequan, Sep. 19, executing a splendid bayonet charge. Its casualties were 7 killed and 33 wounded, among the latter Lieut. -Col. Button, Capt. Ford, and Lieuts. Livingston and Robie. It participated in the charge which routed the enemy at Fisher's Hill on the 22nd, and then followed in pursuit. On Oct. 10 it encamped north of Cedar Creek, where it remained until the battle on the 19th. Its loss during the fierce fighting at Cedar Creek was 15 killed, 82 wounded and 27 missing, out of 350 men in action. Capt. Hall was mortally wounded, and among the wounded were Capts. Franklin, W. H. Smith, Ford and Howard and Maj. Mead. This battle ended the hard fighting of the regiment, though on Nov. 12 it was engaged at Newtown without loss. The command was encamped for five weeks at Newtown and on Dec. 20 moved to Summit Point, where it remained through the winter of 1864-65, on guard and picket duty along the railroad from Charlestown to Winchester. On Feb. 20, 1865, a detachment, while cutting wood, was attacked by guerrillas and 11 men were captured, but were soon exchanged and rejoined the regiment. At the beginning of 1865 the regiment mustered 675 men, of whom 470 were present for duty. Enough recruits were received during January and February to bring the total enrolment to 781, with 662 for duty. Lieut-Col. Mead was promoted colonel March 4, Col. Thomas having resigned Jan. 21, and been appointed brigadier-general Feb. 1. On April 15 the regiment was part of the cordon of infantry about the city of Washington to prevent the escape of the assassin Booth. It participated in the grand review May 23, and on June 1, as part of Dwight's division, it embarked for Savannah, Ga., but, at the last moment through the intercession of Gov. Smith, then in Washington, it was ordered to disembark. It now reported to Gen. Wright, commanding the 6th Corps, and went into camp with the other Vermont troops on Munson's hill until June 28, when it was mustered out and arrived at Burlington, July 2, with 650 officers and men. July 8 and 10 they were finally paid and discharged.

The regiment had 1,016 original members, 752 recruits and 4 transfers, a total of 1,772. Its losses were 102 killed or mortally wounded; 214 who died of disease, 7 by accident and 22 as prisoners - total, 345. It had 264 men wounded, 185 captured and 83 deserted. More of its members (viz.: 33) were promoted to be officers in other regiments than any other Vermont regiment, and more of its members reenlisted than in any other Vermont regiment except the 7th.