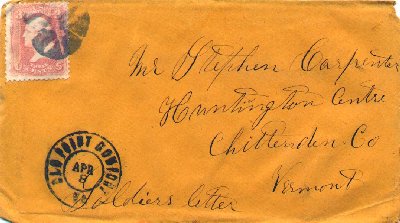 It is with pleasure that I write you a few lines to let you know I am well and hope these few lines will find you the same. We have reached the City of Richmond after the trial of four years. The United States troops captured the city of Richmond April 3, 1865. The president Abraham Lincoln and General Grant reached the city of Richmond last night. Before the Rebs left they sat a good many of the buildings a fire such ones as their ammunition was in. Our men have captured Petersburgh and the report is that our men have caught old General Lee. The rebs evacuated Richmond our men never fired a gun or the rebs never fired a gun. There was some fighting on the other side from where our regt was. We have took a host of artillery and every thing else you can mention.

Tobacco is as plenty as dirt. Some of the boys have got all they can lug and more too. The folks act tickled to have our troops here. I don't know whether they be glad or whether they dastent do no other way. They was almost starving. They will pick up hard tack and think as much of them as we do of a pie when home. The children are around here a picking up hard tack and other stuff that they can eat. I han't got a very good place to write but I guess you can read it. I can't stop to write much more because I am In a hurry to go to bed. I will write more next time and I have just got orders to go out to police. So good by direct as before. This from Joel V Carpenter to his father and mother. I haven't got no letters from Vermont yet but you direct as I told you in my others letters.

The above is a letter Joel wrote to his parents from Richmond, Va after it was captured. Punctuation was added to make it read easier. The letter brings into question the date of Joel's transfer from the 9th Vermont to the 4th Vermont Infantry. According to the Revised Roster, this occurred on January 20, 1865. The information is being verified.

Kevin also graciously contributed a copy of Joel's discharge paper.
(Caution: its pretty large, may take a while to download)